Four days after the Sept. 11, 2001 terrorist attacks, Balbir Singh Sodhi was murdered in front of his Mesa gas station 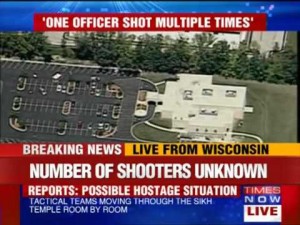 simply because he wore a turban and was confused for a Muslim.

Singh Sodhi wasn’t an Arab…..And he wasn’t a Muslim.

But members of his Sikh faith feared their turbans made them targets, so some men removed the head wear for their own safety.

Off you ever Traveled on London’s public-transport system you may have spotted them: stickers and T-shirts with “Don’t freak, I’m a Sikh” written across them. On the tube, they tend to be greeted with wry smiles, but they have sparked heated debate on Sikh online message boards. “Don’t wear these T-shirts, they’re anti-Muslim,” writes one contributor. “We should wear the T-shirts,” says another. “We need to think of ourselves first – let the Muslims worry about themselves.”

In the weeks following July 7 attack in London it was widely reported that hate crimes against Muslim had increased dramatically. They were not just attacks on Muslim, of course: they were attacks on Non-Muslims of other faiths. The fact is that your average hate-crime perpetrator isn’t going to stop and ask what religion you are before attacking you – or even care, for that matter, about such distinctions. But this point seems to have been lost on the media.

There’s been a huge focus on the impact on Britain’s Muslim community, but the plight of Britain’s 560,000 Hindus and 340,000 Sikhs has been largely ignored.

So to what extent have non-Muslim been the victims of hate crimes? On July 7, as speculation grew that the London bombs were the work of Islamist extremists, the first reported hate crime took place in Erith, Kent: a Sikh gurdwara (place of worship) was firebombed. Since then the Sikh Federation (UK), a lobby group which represents more than 150 Sikh organisations, has recorded five further attacks on gurdwaras and two serious assaults on Sikh individuals. And as Jagtar Singh, of the federation’s national executive council, points out, there is a huge problem of under-reporting, particularly in the case of less serious attacks. “For every crime reported to the authorities, we estimate another 30 to 40 that go unreported,” he says.

Dal Singh Dhesy, a community worker with the Sikh community and youth centre in Handsworth, Birmingham, thinks that Sikhs have had a worse time of it than Muslims – because of their turbans. There is a grim irony to this: turbans are a potent symbol of Sikh identity, but, somehow, certain sections of the white population have come to (wrongly) associate them with Islamist extremists. “The turban-wearing Sikh community is under siege,” he says. He experiences name-calling and stares from white people on a daily basis, and describes other Sikhs facing physical attack and intimidation.

Hindus have also has issues with being confused as Muslims. Ishvar Guruswamy a Hindu who has lived in Kent for 32 years. He had never experienced any problems until shortly after the attempted bombings in London, when a group of teenagers spat at him while shouting, “Bomb, bomb, bomb.” A few days later, a family at his local supermarket shouted the same thing at him. When he told his sister what had happened, her advice was simple – to shave off his beard and wear a large crucifix so no one would mistake him for a Muslim.

An gunman killed six people at a Sikh temple in suburban Milwaukee on Sunday in a rampage that left terrified congregants hiding in closets and others texting friends outside for help. The suspect was killed outside the temple in a shootout with police officers. Why did he do it? Did he confuse the temple worshipers for Muslims? Questions that may never be answered as the assailant was killed by police. Reports are now saying the killer was a white supremacist with a shaved bald head, that disliked Muslims.

The 10 Most Revealing Solyndra Emails

On Thursday, the House Energy and Commerce Committee released a bombshell report detailing its investigation into bankrupt solar company Solyndra....