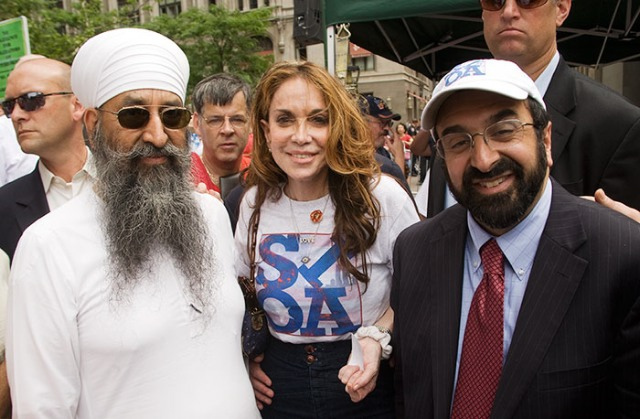 Bhupinder Singh Bhurji, Pamela Geller, and Robert Spencer. Bhurji is the president of the  NAMDHARI SIKH FOUNDATION. The foundation is a member of the Human Rights Coalition Against Radical Islam (HRCARI). HRCARI is a coalition of Hindus, Sikhs, Christians from Sudan, Egypt and Iraq, moderate Muslims and Jews who are victims and targets of radical Islam around the globe.

Standing in solidarity with the Sikhs

A neo-Nazi has stormed a Sikh temple and murdered six people in Wisconsin. Muslim organizations in the U.S. such as Hamas-linked CAIR, abetted by the mainstream media, are cravenly exploiting this horror for their own purposes, blaming “anti-Muslim sentiment,” even though Sikhs aren’t Muslims; are often harassed and persecuted by Muslims (while these same U.S. Muslim organizations remain silent); no one with even rudimentary knowledge of these issues would ever actually mistake a Sikh for a Muslim; white supremacist neo-Nazis generally consider Islamic supremacists to be their allies; and those working against jihad and Islamic supremacism never call for or justify any violence.

In these dark days for the Sikh community in the U.S. and around the world, we stand in solidarity with them. So I thought it fitting to post again the video above, which includes a prayer from Bhupinder Singh Bhurji, Chairman and CEO of Namdhari Sikh Foundation and a Sikh priest, at our AFDI/SIOA Freedom Rally at Ground Zero on September 11, 2011. Our thoughts and prayers are with the Sikhs now.

This weekend, the U.S. Olympic men’s basketball team is widely favored to capture a gold medal. Favored to, but not...