A giant menorah and dreidel in Miami, both of which are artistically and aesthetically covered in seashells, were vandalized over the weekend, in an unsuccessful attempt to spoil the Hanukkah spirit of light, hope and faith. 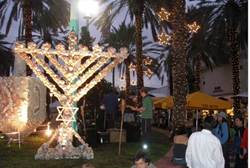 Unidentified vandals attempted to turn the large Chabad Hanukkah display on Lincoln Road into a symbol of hate, scrawling the words “you killed Jesus” on its base.

Zev Katz, head rabbi of the Miami Beach Chabad house responsible for the display, said that while he is deeply disappointed by the act of intolerance, it will not hamper the joy or celebrations of the Jewish holiday, which begins Saturday night.

“We’re not going to be discouraged, we’re gonna keep on going” said Katz, according to a local news report. “And when people try to stop us, we’re gonna say, ‘not only are you not gonna stop us, but we’re gonna go over and on top and do more.'”

Monday morning the shells were replaced and the menorah restored.

Temple Beth Torah, near West Palm Beach, was also hit by anti-Semitism over the weekend, when an unidentified assailant painted a swastika along with “some very offensive words” on a dumpster, according to NBC 6 News.

The Anti-Defamation League condemned both incidents and reported them to the authorities.

Police continue investigating the attack, seeking to find the perpetrators.

Unfortunately this is not the first time the giant menorah in Miami had been attacked by vandals.

”Twelve years ago someone smashed it, terrible, and we weren’t sure if we’re going to actually light the menorah the first night of Hanukkah,” said Rabbi Katz.

Despite uncertainties, however, the Jewish community did light the menorah. This year, too, they will do the same and are expecting over 1,000 people to gather in the celebration of the first night of the Festival of Lights.

In Case You Missed It:  Joe Biden Declares “The Pandemic Is Over” (VIDEO)
Posted in Freedoms and tagged Florida, Freedom, Nazism, Racism, Terrorism.

Hurricane Sandy: Not the Global Warming Bombshell It’s Cracked Up to Be