(Editor’s note: The following commentary by Joseph Farah is a hypothetical scenario, but one all-too-believable given the anti-gun hysteria in the media and here in the nation’s capital. It is offered in the spirit of what former White House Chief of Staff Rahm Emmanuel once said: “Never let a good crisis go to waste.”)

WASHINGTON – President Obama today issued a sweeping executive order banning the manufacture, sale and possession of all semi-automatic firearms in the U.S. 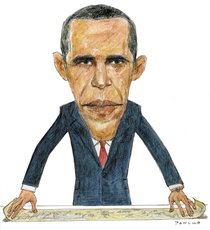 Obama cited for his authority for the action a national state of emergency that has been in effect ever since Sept. 11, 2001, and renewed annually by both President George W. Bush and Obama ever since. He also cited portions of the Patriot Act that suspend certain civil rights that remain classified.

The dramatic action by the president follows closely on the heels of the Newtown, Conn., massacre of 27 schoolchildren and teachers by Adam Lanza a week ago.

Gun-control advocates have been pushing for tighter gun control ever since the attack on the Sandy Hook Elementary School, the fourth mass shooting in the U.S. in 2012.

Yet the action was surprising because Obama vowed to present a detailed plan of action in January after naming Vice President Joe Biden to head a blue-ribbon panel including Cabinet members, law enforcement officials and various agencies of the government. Biden convened the first meeting of the panel only yesterday.

That’s how quickly it could happen.

That’s how liberty could be lost in America in one day.

For many, today was the day the world was supposed to end, according to the Mayan calendar and other ancient documents.

It didn’t, of course. But a scenario like the above would certainly change the world in an instant. The last great hope for mankind and freedom could be turned upside-down in the name of national security and safety.

It might seem implausible, unthinkable, far-fetched – even un-American and, of course, unconstitutional – but has anything like that that ever stopped Barack Obama before?

Am I suggesting this will happen?

Am I suggesting it could happen?

And that’s why I am putting it out there for the American people.

We are very, very close to seeing some draconian action in Washington on this specific action – the unalienable freedom that secures all the rest of our constitutionally guarded liberties.

It may come in a more conventional form – with some legislators who formerly supported gun rights – yielding to the political winds and media distortion sweeping the country.

But it might also happen in an unconventional and unexpected form – with an executive order. You might recall how Paul Begala, a top political adviser to former President Bill Clinton described executive orders: “Stroke of the pen, law of the land. Kinda cool.”

Obama wouldn’t be the first president to do an end-run around Congress to “make law.”

If I’m not scaring you yet, consider this: I am writing this column just minutes after getting a call from someone whose job it is to seek out reliable intelligence reports to protect people in the event of catastrophic events. He, in turn, had just talked someone he described as a very reliable source who had worked in government and in the arms industry who had this normally calm, collected former military officer in a state of near panic because he was told this action could be announced this week.

Normally, that would be a little thin for me to go marching out to sound the alarm of this hypothetical scenario.

And then I found this – a real news story from Reuters published at 11:54 a.m., Wednesday, Dec. 19: “The Obama administration will consider executive actions and specific proposals for legislation as part of its gun policy response to the school massacre in Newtown, Connecticut, U.S. Attorney General Eric Holder said on Wednesday (emphasis added).

“Holder, who has been a vocal proponent of a new ban on certain semiautomatic rifles, told reporters that a range of options need to be considered in the coming weeks.

“Those options will have to include a ‘strong and robust’ Bureau of Alcohol, Tobacco, Firearms and Explosives, the chronically under-funded agency that enforces federal gun laws, he said.

“‘It’s clear that we need to do more,’ Holder said. He did not specifically call on Wednesday for a return of the assault weapon ban.”

Trust me when I tell you this: Something very bad for America is coming very soon.

In Case You Missed It:  BOMBSHELL: Could OMICRON be the CURE for covid? Highly infectious strain with "mild" symptoms could deliver worldwide natural immunity and make vaccines obsolete
Posted in Freedoms, Tyranny and tagged Constitution, Freedom, Obama.

Video: Obama Promised To Cut Deficit In Half By 2012

Here is a video reminder of Obama in 2008 promising to cut the deficit in half. Obama goes on about...