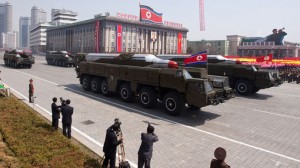 The Japanese government is on high alert, citing indications that Pyongyang will soon launch ballistic missiles at its island neighbor.

Defense Minister Itsunori Onodera said Thursday morning that so far Tokyo was responding by “gathering a variety of information … with a sense of tension,” according to Kyodo.

The Taiwanese government has become the first to advise its citizens not to go to South Korea, as tensions in the region continue to mount. The country’s foreign ministry advised residents to delay trips for business, holidays and education, citing the “unclear situation” in South Korea.

Several Patriot Advance Capability-3 missile interceptor units have been deployed in Japan over the last few days to defend key military units and the country’s capital city, Tokyo. One of the units was set up at the Defense Ministry’s headquarters in Ichigaya, in Tokyo’s Shinjuku Ward.

Japan authorized its forces to shoot down anything fired at it from North Korea.
The indication of the new North Korean readiness follows South Korean and US forces’ announcement of an upgrade of their surveillance alert status to the highest possible level before coming into a state of war.

It also comes amid revelations from South Korea’s Yonhap news agency, with a government source saying Pyongyang is preparing multiple launches of shorter-range Scud and Rodong missiles. “There are clear signs that the North could simultaneously fire off Musudan, Scud and Nodong missiles,” an anonymous military source was quoted as saying on Wednesday.

The military alert status is now at Watchcon 2, reflecting a perceived “vital threat” from North Korean missiles after the North warned of a ‘thermonuclear’ war and asked foreigners to leave South Korea.

To counter the threat, two Aegis destroyers with SPY-1 radar have been placed on standby by the South along the Korean Peninsula.

On Tuesday, the commander of US Pacific Command said that the US is ready capable of countering the missile threat.

In Case You Missed It:  Leaked military documents show that ivermectin "works throughout all phases" of covid... so why has the medical establishment SUPPRESSED it for two years?
Posted in Freedoms and tagged Communism, Japan, Missile Defense, North Korea, War.