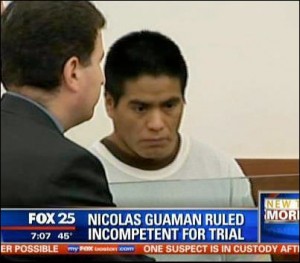 An illegal alien in Massachusetts who was drunk driving when he hit and dragged a Milford, Mass. man to his death has been ruled incompetent to stand trial.

Insane? Nope. Mentally handicapped? Not even close. “Unique cultural background”? You got it. Political correctness has gone afoul.

Incompetent Judge Janet Kinton-Walker ruled that 34 year old Ecuadorean Nicolas Guaman’s “unique cultural background” prohibits him from understanding the U.S. legal process. The judge also ruled that Guaman lacks the ability to effectively consult with his attorney. (What, they couldn’t find a Spanish-speaking attorney in all of Massachusetts?)

“My first reaction yesterday was devastation,” Maloney said. “I just can’t believe that he was found mentally incompetent based on his education level and unique language. However, after being able to think about it overnight, I’m hoping that this will close whatever loopholes that the defense has to try to appeal or get a retrial if we ever get to a trial.”

“I think this does give the defense attorney the opportunity to request the bail for Guaman,” said Maloney. “Up until now, he has not been eligible for bail, so he may be eligible to be released on bail because of this recent decision.” (Gee, the southern border is just as easy to cross heading south, isn’t it?)

When asked whether she believes Guaman does not understand the court process in the United States because of his language barrier, Maloney said: “No, I don’t believe it. In the past, he’s had other run-ins with the law. He’s been in court multiple times on other charges prior to all this in August 2011, and a Spanish interpreter or no interpreter was used for those hearings and he’s always managed just fine.”

Maloney and her family were scheduled to meet with the DA today to discuss the ruling and what the next steps in the case may be. Guaman pleaded guilty [see correction] to second-degree charges and is due back in court in June. Because of the court ruling, he may be eligible for bail.

Without a doubt, defense attorneys across the nation will be watching this case and its outcome very closely. If, somehow, Guaman avoids justice – you can count on this defense coming to a courthouse near you – soon.

CORRECTION: The assistant editor made an error and wrote that Guaman pleaded “guilty” to the charge. He actually pleaded not guilty, as pointed out by the author Michael Miller.

Bad Deal for the U.S.: Kerry on Missile Defense

MICHAEL REYNOLDS/EPA/Newscom U.S. Secretary of State John Kerry stated during his recent trip to China that the U.S. would withdraw...