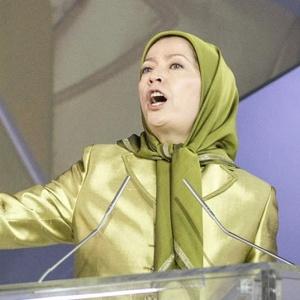 The West should give its full blooded support to Maryam Rajavi, the progressive and charismatic President of the Iranian Mojahedin-e-Khalq ( MEK), and help her bring about REGIME CHANGE in IRAN, and free the sorely pressed and oppressed Persian people from the ISLAMO FASCIST MULLAH REGIME in Tehran.

Rajavi’s numerous US supporters almost uniformly agree. Rajavi, advocates a Jeffersonian 10-point plan for Iran’s future that would disarm any US politician — complete with notions like separation of mosque and state, true rule of law and renouncement of nukes and other WMDs.

And yes, it also includes a presidential election open to all Iranians (as opposed to the June 14 ruse, in which only a handful of candidates, pre-approved by an unelected bunch of clerics, were permitted to run.) As president of the National Council of Resistance, or the Iranian Mojahedin-e-Khalq, Rajavi will assume power once the group unseats the mullahs. She will then leave her posh Paris compound for Tehran, where she’d serve as president-elect for a six-month period, as a new constitution is forged by the Iranian people. Then presidential election would follow — and she’d exit stage left. 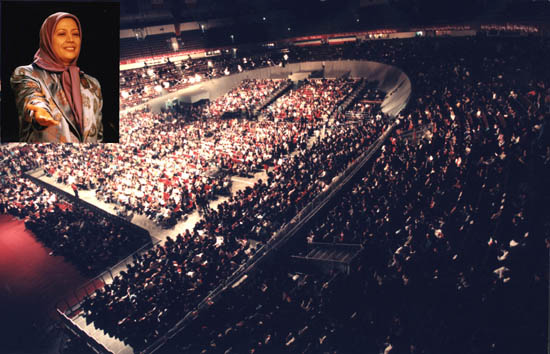 Maryam Rajavi was born in 1953 to a middle class family in Tehran. She has a daughter (born in 1982) and a degree in metallurgical engineering. Mrs. Rajavi became acquainted with the anti-shah movement in 1970. After entering Sharif University of Technology in Tehran to pursue her education, she quickly became a leader of the student movement and joined the People’s Mojahedin of Iran, the Muslim, democratic and nationalist movement that espouses the establishment of a secular government in Iran. The shah’s regime executed one of her sisters, Narges, and the Khomeini regime murdered another, Massoumeh, who was pregnant at the time, along with the sister’s husband. 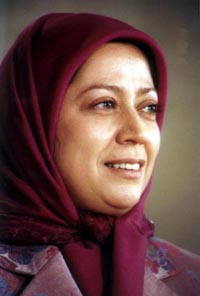 Mrs. Rajavi was active in the social department of the Mojahedin, and played an instrumental role in attracting and recruiting university and high school students to the movement in the post-shah Iran, when the Mojahedin emerged as the principal opposition movement to the Khomeini regime. She was a candidate for parliamentary elections in Tehran in 1980. Despite widespread rigging, she received more than a quarter of a million votes.
Mrs. Rajavi played a decisive role in organizing two major peaceful demonstrations in Tehran in April and June of 1981 against the new dictatorship. Following June 20, 1981, Khomeini unleashed his pervasive terror on Iranians. Tens of thousands were arbitrarily arrested or executed. During this period, the  Pasdaran (the Revolutionary Guards Corps) raided her places of residence several times, but she managed to survive these encounters.
In 1982, Mrs. Rajavi was transferred to Paris, the political headquarters of the movement. She rose rapidly through the ranks and emerged as the most capable and qualified woman member of the movement. She was eventually elected as the Mojahedin’s joint leader in 1985 and four years later, in 1989, became the Secretary General of the organization.
Following the formation of the Resistance’s military arm, the National Liberation Army (NLA), in 1987, she was appointed the army’s Deputy Commander in Chief, playing an instrumental role in transforming the NLA into a well-trained, modern and mechanized military force.

In August 1993, the National Council of Resistance, the Iranian Resistance’s Parliament, elected Mrs. Rajavi as Iran’s future President for the transitional period following the mullahs’ overthrow.
She subsequently resigned from her posts in the Mojahedin and the NLA to devote her entire time to her new responsibility. Shortly afterwards, Mrs. Rajavi went to Paris to lead the Resistance’s endeavors on the international scene.
In her new role as the President, she quickly presented a formidable and serious political, social, cultural and ideological challenge to the ruling clerics.
Under her leadership, women have attained key positions within the ranks of the Resistance. Women comprise half the members in the NCR. They occupy the most senior positions of responsibility in political, international and military arenas in the Resistance. One-third of the NLA’s combatants and many of its commanders are women, as is the entire Leadership Council of the Mojahedin.
Mrs. Rajavi’s election gave the oppressed and demoralized citizenry, especially women, new hopes for a better future. Equally profound and inspiring was the impact of her election among Iranians living abroad. Many delegations from the four-million-strong Iranian exile community, consisting of the most educated and skilled sectors of the society, rushed to meet Mrs. Rajavi in Paris.
Mrs. Rajavi says: “I have dedicated my life to a better future for the people of Iran. I want to prove that as a democratic alternative for society, Islam is not aggressive and can be quite constructive for women. This sense of responsibility gives me inner calm and the feeling of genuine freedom… After the mullahs are overthrown, we must try, before all else, to  eliminate the sense of vengeance and hatred among our people. We must create unity and expand the notion of tolerance in society. It is our responsibility to revive the Iranian people’s identity and values.”

Reviving the arts
Mrs. Rajavi also paid special attention to Iranian art and culture, two rich and deeply invaluable features of the Iranian history, which the mullahs have adamantly tried to pervert.
Under her direction, Iranian artists and musicians, forced into exile, stepped forward and began performing to revive Iran’s arts and culture.

In a  speech to 15,000 Iranians in Dortmund on June 16, 1995, Mrs. Rajavi presented her 16-point “Charter of Fundamental Freedoms” for future Iran after the mullahs’ overthrow. In her speech, Mrs. Rajavi said that love of freedom was the driving force of Resistance movement. Without it, she said, “we could not have stood firm against the ruling dictatorship. Our nation has paid the price of freedom with 100,000 martyrs.” Mrs. Rajavi also presented the main platform of the Resistance for the future of Iran emphasizing the Resistance’s commitment to the freedom of speech, opinion, the press, parties and political associations, and free elections. She emphasized that elections will serve as the sole basis in determining the legitimacy of government.
In article 6 of the platform, Mrs. Rajavi reaffirmed women’s equal political, social, cultural and economic rights with men. She also underscored women’s rights to choose and get elected, their complete freedom to choose any occupation or government post, including judgeship and presidency, the right to choose their husbands, equal rights in divorce and freedom in choosing their clothing.
Article 14 of the platform stipulated that in the future of Iran, a free market, private ownership and investment to expand the national economy will be guaranteed. The foreign policy of a democratic Iran, Mrs. Rajavi affirmed, will advocate peace, coexistence, regional and international cooperation.

There can be no doubt Maryam Rajavi was born for these times, and she represents the true face of the Persian Future,  with the Separation of Mosque and State, True Rule of Law and Renouncement of Nukes and other WMDs, and as such, America and the Free West should lend her our full support.

In Case You Missed It:  ANALYSIS: Biden regime to wage WAR OF TERROR against America as punishment for voting red
Posted in Freedoms.

The release of the State Department’s latest Trafficking in Persons Report (TIP) revealed that Asia is home to some of...