While many experts were encouraged by the 4.1 percent economic growth reported for the third quarter, James Rickards, portfolio manager for the West Shore Real Asset Income Fund, wasn’t one of them. 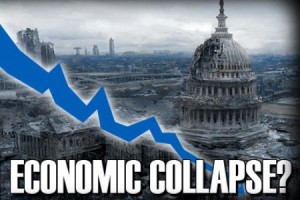 “There is good reason to believe that the economy is heading for another recession soon, rather than the more robust growth economists keep predicting,” he writes in The Darien (Connecticut) Times.

At 54 months, this recovery has now lasted almost as long as the 57-month post-World War II average, Rickards notes.What’s really happening is that we’re still in a depression, Rickards explains. “The best way to make sense of this anemic recovery is to understand that it is not a normal business cycle recovery at all, but the continuation of an economic state more properly defined as a depression,” he writes.”In watching the stock markets, investors should be aware that they are witnessing another bubble in the making. Enjoy it while it lasts, because it will end badly. Early-to-mid 2014 may be good time to take profits, stay liquid and adopt a more defensive posture.”

But many economists sounded a note of optimism after last week’s news of the 4.1 percent third-quarter growth.

“The strength in domestic consumption and investment activity points to a more constructive narrative on growth than previously thought.”

In Case You Missed It:  Project Veritas Whistleblower: Washington Nursing Home Patient Dies After Being Given a ‘Chemical Restraint’ to Coax Her Into Taking Vaccine Against Her Will; Was Allegedly Told Jab Is a “Flu Vaccine” – (VIDEO)
Posted in Financial, Tyranny and tagged Depression, Financial, Obama, Obamanomics, Recession, Unemployment, United Socialist States of America.

Does the American News Media Have an Anti-Christian Bias?

In Prodigal Press: Confronting the Anti-Christian Bias of the American News Media, Warren Cole Smith, journalist and author, explains how...