FBI counterterrorism agents are visiting gun shops in South Carolina to investigate “suspicious purchases” made by conservative people who talk about “big government,” according to a new report. 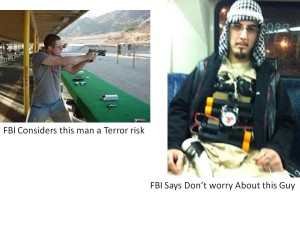 Author Brandon Turbeville says he was approached by an individual who works in a Columbia, South Carolina gun shop to relate the story of how an FBI agent entered the store on Monday, showed his credentials, before proceeding to ask a series of stunning questions.

Telling the gun store worker he was tasked with visiting all the firearms outlets in the local area to check on “suspicious purchases” for counterterrorism purposes, the agent then began discussing what in actual fact were “completely normal transactions,” such as, “paying with cash, purchasing long guns, and other similarly innocuous behavior.”

The FBI agent then reportedly made a shocking remark that almost seems too chilling to believe.

Before the agent left the store, he handed the employee a flyer which lists paying with cash, buying in bulk, along with other seemingly innocuous behavior as suspicious activity.

While there’s little chance of verifying the story since the FBI would almost certainly deny the claim, the notion of FBI agents charactering innocuous activity as a potential indication of terrorism is firmly established in the federal agency’s own literature and training procedures.

The FBI has also repeatedly labeled those who identify as “sovereign citizens” to be domestic terrorists.

In 2012, we reported on how the FBI’s Communities Against Terrorism (CAT) program was instructing businesses that banal activities conducted by millions of Americans on a daily basis were potential indications of terrorist activity.

Flyers for the program being handed out to businesses such as Internet cafes even listed paying for a cup of coffee with cash as a suspicious activity.

In total, there are 25 different CAT flyers aimed at businesses from across the spectrum – everything from hobby shops to tattoo parlors.

The flyer pictured above which was reportedly handed to the gun store worker by the FBI agent contains very similar language to that used in flyers produced for the FBI’s Communities Against Terrorism program.

In Case You Missed It:  Democrats Repaying Anti-Trump Republican Adam Kinzinger With Redistricting That Will End His Career
Posted in Tyranny and tagged Conservatism, FBI, Freedom, Obama, United Socialist States of America, US Citizen.

Remarkable footage of the largest and "most dangerous" meeting of Al Qaeda commanders in years has emerged online. The footage...