Climate McCarthyism has claimed another victim. Dr Caleb Rossiter – an adjunct professor at American University, Washington DC – has been fired by a progressive think tank after publicly expressing doubt about man-made global warming. 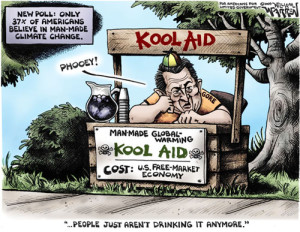 Rossiter, a former Democratic congressional candidate, has impeccably liberal credentials. As the founder of Demilitarization for Democracy he has campaigned against US backed wars in Central America and Southern Africa, against US military support for dictators and against anti-personnel landmines. But none of this was enough to spare him the wrath of the Institute for Policy Studies (IPS) when he wrote an OpEd in the Wall Street Journal describing man-made global warming as an “unproved science.”

Two days later, he was sacked by email. The IPS said: “We would like to inform you that we are terminating your position as an Associate Fellow of the Institute for Policy Studies…Unfortunately, we now feel that your views on key issues, including climate science, climate justice, and many aspects of US policy to Africa, diverge so significantly from ours.”

In the WSJ OpEd entitled Sacrificing Africa for Climate Change, Rossiter argued that Africans should benefit from the same mixed energy policy as Americans rather than being denied access to fossil fuels on spurious environmental grounds by green activists. He wrote: “The left wants to stop industrialization – even if the hypothesis of catastrophic, man-made global warming is false.”

But the Institute for Policy Studies (“Ideas into Action for Peace, Justice, and the Environment”) is ideologically committed to ensuring that Africans only enjoy the benefits of expensive, intermittent, inefficient renewable energy such as wind and solar.

“If people ever say that fears of censorship for ‘climate change’ views are overblown, have them take a look at this: Just two days after I published a piece in the Wall Street Journal calling for Africa to be allowed the ‘all of the above’ energy strategy we have in the U.S., the Institute for Policy Studies terminated my 23-year relationship with them…because my analysis and theirs ‘diverge.'”

His sacking follows the persecution last month of Lennart Bengtsson, a Swedish meteorologist and climatologist who decided to resign his position at the Global Warming Policy Foundation after being harassed by climate alarmists for his “incorrect” views on man-made climate change.

Congressional investigators reacted with outrage to the Internal Revenue Service’s claim that it lost two years of Lois Lerner’s emails...