by BEN SHAPIRO  -On Friday, State Department Deputy Spokesperson Marie Harf said the United States was “very concerned” about the kidnapping of three Israeli boys, including American citizen Naftali Frankel, 16, by terrorist group Hamas. “We are working with the government of Israel and with the Palestinian Authority to try to ensure the situation is resolved quickly, and that the three teenagers are safely reunited with their families. 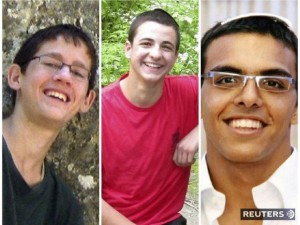 Harf maintained that the “Israelis and the Palestinian Authority are working closely together” and that the United States was “giving this cooperation our full encouragement.” Harf said that the State Department would not say whether an American citizen was among the kidnapped.

There is no such cooperation. As Prime Minister Benjamin Netanyahu explained, “Israel warned the international community about the dangers of endorsing the Fatah-Hamas unity pact. The dangers of that pact should now be abundantly clear.”

The sad truth is that the United States is funding the kidnappers of these boys, including an American citizen. It is currently illegal to fund any organization connected with Hamas. Nonetheless, the Obama administration is doing it after the formation of a unity government between the Palestinian Authority and Hamas; $400 million American taxpayer dollars will go to that entity in violation of law. 18 US Code Section 2339B demands:

But Naftali Frankel does not look like Barack Obama’s imaginary son, so he doesn’t care.

And while Naftali Frankel may be “the least of these,” Barack Obama simply doesn’t give a damn.

In Case You Missed It:  Metrolink and Amtrak Suspend Service Between LA and San Diego Indefinitely Due to the Ground Shifting
Posted in Financial, Israel, Terrorism, Tyranny and tagged Financial, Hamas, Islam, Israel, Judea and Samaria, Palestine, Palestinians, Terrorism, US Citizen.

The terrorist kidnapping of Eyal Yifrach, 19, Gilad Shaar, 16, and Naftali Frenkel, 16, a dual Israeli-American citizen has led to some problematic reporting. Here, we...