By Alan Caruba :  I predict that, as Obama’s approval and popularity continues to decline, we will hear him and his soul mate, Attorney General Eric Holder, increasingly express the view that their race has something—maybe a lot—to do with the criticism they receive. 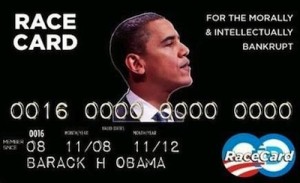 In a recent ABC News interview Holder said, “There’s a certain level of vehemence, it seems to me, that’s directed at me (and) directed at the President. You know, people talking about taking their country back…There’s a certain racial component to this for some people. I don’t think this is the thing that is a main driver, but for some, there’s a racial animus.”

Well, duh! Of course, “for some people” there’s a racial animus because “some people” are racists, but the AG neglected to note that they come in all colors, not just white. Nor are they exclusively Republicans.

Was it “racist” for 96% of black voters to pull the lever for Barack Obama in 2008 and 93% to do so in 2012? Were they voting exclusively because of the color of his skin and theirs? There is a strong likelihood of that and why not? This would be a good time to note that Obama would not be President without a substantial amount of support from white voters, 43% in 2008 and 39% in 2012.

Have blacks made progress in the nation’s halls of power? In the 113th Congress, there are 43 African-Americans in the House of Representatives and one in the Senate. Many of the nation’s cities have black mayors. There have been black governors as well. Et cetera! In June, the nation celebrated the 50th anniversary of the Civil Rights Act. It worked.

Compare that with Obama’s chief legislative achievement, the Affordable Care Act which has less and less public support with every passing day. It was widely protested prior to receiving the solid Democratic vote to pass it. No Republican voted for it. It is not likely to celebrate a comparable anniversary and I suspect that it will be repealed if the GOP gains control of the White House and Congress because that’s what they will have been elected to do.

Things have been going badly for the President and it has nothing to do with his race. (Last time I checked he was half-white.)

It has been Holder who has been most widely quoted for his comments on race and racism, and since he is black, it may seem odd that an African-American who has risen to such a high position should be so conscious of race, but he surely is. Some years back he called the United States a “nation of cowards” on race. During his ABC interview he said “I wouldn’t walk away from that speech. I think we are still a nation that is too afraid to confront racial issues.”

I respectfully disagree. For someone who can recall the last years of the Jim Crow laws in the South and other elements of racism affecting blacks, the emergence of the civil rights movement in the late 1950s and laws that were passed to end open bigotry have been such that two generations of blacks in America have been spared a lot of grief as doors were opened everywhere.

Obama was a major beneficiary of the changes that have occurred in our society, but he noted his drop in popularity and approval in the 2013 polls saying “There’s no doubt that there’s some folks who just really dislike me because they don’t like the idea of a black President,” adding, “Now, on the flip side of it is there are some black folks and maybe some white folks who really like me and give me the benefit of the doubt precisely because I’m a black President.”

More Americans than ever—not just “some folks”—are less inclined to give him the benefit of doubt over his performance in office and it has nothing to do with his race and everything to do with a succession of scandals and other failures that more than five years in office has inflicted on their nation.

It’s not just the President and the Attorney General who believe that any criticism leveled against them has more to do with racism than reality. Oprah Winfrey, when asked if she ever thought that Obama was treated differently because he’s black, famously said, “There is a level of disrespect for the office (of President) that occurs. And that occurs, in some cases—and maybe even many cases—because he’s an African-American.”

Oprah went on to say that “There are still generations of older people who were born and bred and marinated in it, in that prejudice and racism. And they just have to die.”  Oy!

It’s not racism. If racism were a factor he wouldn’t be President. Elected twice!

He is being criticized for a growing perception of incompetence, a lack of management and leadership skills, a sense that he would rather be on the golf course than in his office, and a sense of his immaturity. He has never accepted blame for anything. The fact that he routinely lies about everything might have something to do with the criticisms as well.

Sadly, too, the former community organizer has sought to pit one group of Americans against another. Instead of uniting Americans, he has sought to split them off into sectors of race, sex, wealth, and other factors.

The one factor uniting Americans today is the desperate wish that his second term was over.

In Case You Missed It:  Rep. Marjorie Taylor Greene Has Huge Lead In Midterm Primary – ‘Cruising To Reelection’
Posted in Tyranny and tagged hate, Obama, Racism.

The facts are not in dispute. Israel accepted a ceasefire in the morning and suspended all military operations against Gaza....