The deadliest Ebola outbreak in recorded history is happening right now. The outbreak is unprecedented both in infection numbers and in geographic scope. And so far, it’s been a long battle that doesn’t appear to be slowing down. 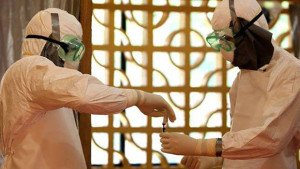 The Ebola virus has now hit four countries: Sierra Leone, Guinea, Liberia, and recently Nigeria, according to the country’s ministry of health.

The virus — which starts off with flu-like symptoms and often ends with horrific hemorrhaging — has infected 1,201 people and killed an estimated 672 since this winter, according to the numbers on July 23 from the World Health Organization.

This outbreak concerns the most deadly of the five Ebola viruses, Zaire ebolavirus, which has killed 79 percent of the people it has infected in previous outbreaks. (The virus is called that after the formerly named Zaire, which, along with Sudan, experienced the first Ebola outbreak back in 1976.)

Bleeding from orifices is one of the more unusual and memorable symptoms of viral hemorrhagic fevers like Ebola. In later stages of the disease, some people bleed from the eyes, nose, ears, mouth, and rectum. They may also bleed from puncture sites if they’ve had an IV.

External bleeding can be one of the main symptoms that can help people realize they’re dealing with a case of Ebola, since other signs — first fevers and headache, then vomiting and diarrhea — can be caused by any number of illnesses. Internal bleeding can happen, as well.

What actually kills people is shock from multiple organ failure, including problems with the liver, kidneys, and central nervous system.

Symptoms come on abruptly after an incubation period of 2 to 21 days. And people generally die between day 6 and 16 of the illness.

To contract Ebola, if someone touches the blood or bodily fluids (including sweat, urine, and semen) of a person or animal who’s infected (alive or dead) they cane become ill. People can also catch it through indirect contact with victims’ fluids, such as via bedding or medical equipment.

Patients are treated for symptoms, including IV fluids for dehydration. It’s important to remember that some people do survive an Ebola infection.

The past week has seen Ebola infecting key medical staff including American doctors, who knew proper infection control methods yet still caught the disease. If a community is to stop Ebola, they must go into lockdown procedures. Lockdown procedures include the closing of the border to a present non-infected nation.  A U.S. aid worker who was infected with the deadly Ebola virus while working in West Africa will be flown to the United States to be treated in a high-security ward at Emory University Hospital in Atlanta, hospital officials said on Thursday.

The United States has detailed procedures to deal with a pandemic outbreak and it carries the force of law. Under section 361 of the Public Health Service Act (42 U.S. Code § 264), the U.S. Secretary of Health and Human Services is authorized to take measures to prevent the entry and spread of communicable diseases from foreign countries into the United States and between states.

The CDC utilizes two basic strategies when trying to contain a public outbreak of something as deadly as Ebola and they are ;” href=”http://www.cdc.gov/quarantine/specificlawsregulations.html”>Isolation and Quarantine.

Wit the present immigration crisis at the border, this government should be enacting protocols to limit the chances for Ebola from coming into the United States. Instead, President Obama is having ICE and DHS load up the busses and planes, at taxpayers expense to ship them throughout the United States without going through a minimum of a three week health screening period (i.e. Ebola’s incubation period).  All it would take is one sick passenger or an illegal alien crossing our border to start a local outbreak in the United States.

As lawmakers prepared to head home from Washington for the long August recess, one ambitious organization sent them packing with...