By David Singer : As the war between Israel and Hamas enters its fourth week – the frenzied condemnation of Israel for exercising its inherent right of self-defence continues to dominate the media coverage of the conflict. 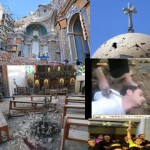 “The world is transfixed by the conflict in Gaza, as the death tolls of both Palestinians and Israelis killed in the fighting continue to rise. It has animated global public opinion and sparked protests in myriad far-flung cities.

But as the rockets and bombs fall, a deadlier war next door rolls on. The Syrian civil war has claimed 170,000 lives in three years; this past weekend’s death toll in Syria was greater than what took place in Gaza. By some accounts, the past week may have been the deadliest in the conflict’s grim history. Meanwhile, the extremist insurgents of the Islamic State (also known as ISIS), have continued their ravages over a swath of territory stretching from eastern Syria to the environs of Baghdad, Iraq’s capital; the spike in violence in Iraq has led to more than 5,500 civilian deaths in the first six months of this year.”

Iraq and Syria:  Millions of Christians, whose ancestral presence there predates current Muslim majorities by centuries

“Why should it matter if a nearly 2,000-year-old way of life practiced by millions is being exterminated and no one will do anything to halt it?

Perhaps because it teaches a wider lesson about what the civilized world faces when it confronts rampant Islamic extremism.

In much of Iraq and Syria today, millions of Christians, whose ancestral presence there predates current Muslim majorities by centuries, are being scrubbed out of their homes.

But, while some in the wider church and the media are paying attention, getting war-weary Western nations to take effective action seems impossible. Even humanitarian aid isn’t being widely discussed.”

Sharia law has been imposed in Mosul – where Christians have lived since shortly after the death of Christ.

Christians were given 24 hours to leave Mosul or convert to Islam and pay a tax – or die.

The letter “N” (for “Nazarene”) has been daubed on Christian homes to denote they are available for looting or destruction.

“A senior Christian cleric in Iraq, Patriarch Louis Sako, estimated that before the advance of IS, Mosul had a Christian community of 35,000 – compared with 60,000 prior to 2003.

According to the UN, just 20 families from the ancient Christian minority now remain in the city, which Isis has taken as the capital of its Islamic state.”

“Across the Middle East, a long history of hard-won co-existence faces extinction from a belief system devoted to domination, and this time in control of an “Islamic state.” Will it again strike us directly, as it did 13 years ago this Sept. 11?”

Nuri Kino – reported on Fox News – confirms the tragic situation in Syria and identifies those engaged in persecuting these ancient Christian communities:

“Aleppo, Syria’s largest city, also has been nearly emptied of Assyrians, Armenians and other non-Muslims…

… The prideful tone in which the perpetrators speak whenever I have interviewed them—both Al Qaeda and IS——is equally shocking. These are mostly disgruntled young men who were teetering on the edges of society in their own homelands, often in European suburbs, and now believe they have the power to do whatever they want in the name of Islam. They can claim any house in IS-controlled areas of Iraq and Syria as their own, and tell the owners to either leave or risk being killed. They can take any woman as their wife…

… At least 700, 000 non-Muslims—Christians, Mandeans, Yezidis and others—have left Iraq by now. No one knows how many have left Syria.”

“ISIS has set out to erase every Christian trace. All 30 churches were seized and their crosses stripped away. Some have been permanently turned into mosques. One is the Mar (Saint) Ephraim Syriac Orthodox Cathedral, newly outfitted with loudspeakers that now call Muslims to prayer. The 4th century Mar Behnam, a Syriac Catholic monastery outside Mosul, was captured and its monks expelled, leaving behind a library of early Christian manuscripts and wall inscriptions by 13th-century Mongol pilgrims.

Christian and Shiite gravesites, deemed idolatrous by ISIS, are being deliberately blown up and destroyed, including on July 24, the tomb of the 8th-century B.C. Old Testament Prophet Jonah, and the Muslim shrine that enclosed it.”

Patrick Coburn does not mince his words in The Independent:

“It is the greatest mass flight of Christians in the Middle East since the Armenian massacres and the expulsion of Christians from Turkey during and after the First World War.”

Yet the media shows little interest in exposing the decimation and dispersal of the Christian communities in Syria and Iraq.

The West is equally as disinterested at this appalling ethnic and religious cleansing and forced transfer of Christians.

An impotent United Nations shows its unwillingness to intervene.

Israel meanwhile ensures that Jews will never find themselves in the same boat as the abandoned and hapless Christians.

In Case You Missed It:  Proof that the Taliban takeover was not Biden's incompetence But TREASON!
Posted in Terrorism and tagged Asyrian genocide, Christians, Christians Middle East, Islam, Jihad, Syria, Terrorism.

Ebola: what you need to know

The deadliest Ebola outbreak in recorded history is happening right now. The outbreak is unprecedented both in infection numbers and in...