Obama Won’t Stop the Border Crisis, Even to Stop a Health Crisis: When the story broke last week that an American infected with Ebola was brought into the country for treatment, many were concerned at the wisdom of such a plan.

But of course, we can’t ask those questions at our WIDE OPEN BORDER. 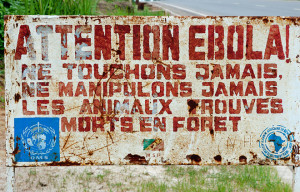 Customs and Border Protection reported that its agents caught nearly 1,000 illegals from Ebola-struck countries this year, meaning many more have not been apprehended, the question remains whether President Barack Obama will secure the border and stop shipping illegals across the U.S. to prevent a major pandemic from killing Americans.

Ebola, an incurable disease which can kill up to 90% of those it affects, is spreading throughout West Africa, hitting the countries of Nigeria, Liberia, Guinea and Sierra Leone the hardest, and right now citizens from these countries are flooding across America’s wide open border, according to a secret CBP report obtained by Breitbart.

Yet instead of stopping illegal immigration, the Obama administration is outright encouraging it and has even went as far as allowing Ebola patients to enter the United States, an unprecedented move which raises the risk of an outbreak even higher as the hospital in Atlanta, Georgia, where the patients are being treated doesn’t follow a high level of biocontainment precautions.

By shipping illegals to various regions of the U.S., the Obama administration could also be spreading Ebola or another deadly disease carried by an illegal immigrant right now across America.

“A public health crisis, the likes of which I have not seen in my lifetime, is looming,” wrote Dr. Elizabeth Lee Vliet. “Hardest hit by exposures to these difficult-to-treat diseases will be elderly, children, immunosuppressed cancer-patients, patients with chronic lung disease or congestive heart failure.”

Will President Obama attempt to stop this looming public health crisis which could kill millions of Americans? If his orchestrated collapse of America’s border is any indication, the answer is a resounding no.

By John W. Lillpop Barack Obama, once considered the “smartest man in the world,” at least in his own mind, took the...