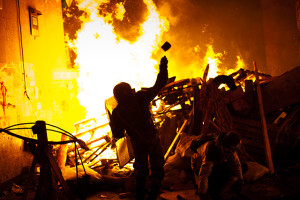 Part of the war cycle is just the general feeling or attitude shifts due to economics. We seem to be headed for such a fateful turn.

The police domestically have turned militaristic.

This is a very serious issue far beyond what most people would even guess. It tends to show the changing attitudes within society.

Couple this with Obama who seems to think he was elected to start a war. We are approaching a serious turning point that may reshape the world as did 1932 following the economic trend of the Great Depression.

The year 1932 saw Mao come to power in China. In Germany, Hitler came to power. FDR came to power in the United States. Even in Japan, the seeds of war were planted with the May 15 Incident, in which Prime Minister Tsuyoshi Inukai was assassinated by young military officers in an attempted coup. The killing spread fear among Japan’s liberal politicians and strengthened the militarists, who eventually led the country into the catastrophic Pacific War.

1932, which was also the low in the markets from 1929. The year 2007 began the changing process and we should be looking ahead now [for] the war cycle will turn upward.

We are witnessing the collapse of democracy or to put it in the proper perspective – the right of the people to vote even in a republic. Europe is hell-bent on removing any democratic process because Brussels believes they know best and the people are just too stupid to know what is best for them.

So 2007 marked the beginning of shift in attitude.

In Case You Missed It:  Leading scientists publish review warning that COVID-19 booster shots are “not appropriate” and lack supporting data
Posted in Freedoms and tagged democracy, Election, Financial, Freedom.

A day after President Obama declared the siege of Mount Sinjar broken and the crisis effectively over, Yezidi leaders say...