August is supposed to be a quiet time in the metropolitan Washington, D.C. area when Congress takes its traditional recess and everyone else who makes a living off Congress from lobbyists to journalists take advantage of the members’ absence and go on vacation. But events keep happening in the IRS scandal that are upsetting the usual norm, and the latest is more news about the destruction by the IRS of possible evidence in the case. 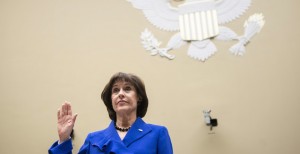 In addition to the investigation of the House Oversight and Government Reform Committee, Judicial Watch has been dogged in pursuing litigation under the Freedom of Information Act against the Obama administration over its refusal to turn over documents in the IRS targeting scandal. Judicial Watch convinced the federal judge assigned to its case, Emmet G. Sullivan, that the IRS needed to explain how a significant chunk of Lois Lerner’s emails could have gone missing and why the agency did not bother to inform Judicial Watch or the court. As a result, various IRS officials have been forced to file sworn affidavits with the court explaining the circumstances surrounding the hard drive on Lerner’s laptop going bad and their inability to recover any emails from that hard drive.

But in the midst of those affidavits was another stunning admission: that Lerner’s Blackberry had also been destroyed. Thomas J. Kane, the deputy associate chief counsel of the IRS, said in an affidavit that Lerner’s Blackberry, which had been issued to her on Nov. 12, 2009, had been “wiped clean” and “removed as scrap for disposal in June 2012.” There is no explanation given in Kane’s affidavit as to why this was done – in contrast to the detailed affidavits filed in the Judicial Watch case that describe the problems with Lerner’s hard drive on her laptop.

By June 2012, Lerner knew that the jig was up on the IRS’s targeting of conservative organizations applying for tax exempt status. Rep. Jim Jordan, R-Ohio,told Fox News that by June, his staff and that of the Oversight Committee “had sat down with Ms. Lerner and confronted her about information we were getting from conservative groups in the state of Ohio and around the country.”

Since, as one of the affidavits says, “the Blackberry device displays and stores” all of the emails contained in the Microsoft Outlook mailbox on a user’s office computer, Lerner’s Blackberry would have contained all of the emails that have conveniently gone missing due to the destruction of the laptop she used in her office. Yet the Blackberry was suddenly “wiped clean” in June right after Lerner realized that Congress was becoming aware of what her office was doing.

On top of that, Judicial Watch claims that a Justice Department lawyer admitted in a telephone call on August 22 that “Lois Lerner’s emails, indeed all government computer records, are backed up by the federal government in case of a government-wide catastrophe.” But the Department of Justice lawyers said that “this back-up system would be too onerous to search.” This is in complete conflict with the statements by IRS officials, including Commissioner John Koskinen, that there are no back-up versions of the missing Lerner emails. DOJ says that Judicial Watch is misinterpreting the telephone call.

Judge Sullivan seems determined to find out what the real story is here since he has not only assigned a federal magistrate judge to oversee the issue but he has encouraged Judicial Watch to submit a request for further discovery into the missing IRS records after Sept. 10.

Cleta Mitchell, who represents True the Vote in its lawsuit against the IRS, says that she has been told about the back-up system by various government officials. And yet there is nothing in any of the affidavits filed by DOJ lawyers in the Judicial Watch case discussing this back-up system. If one does exist and DOJ lawyers have failed to inform Sullivan about it, they – and the administration – will be in deep trouble when they appear before Sullivan again.

Who Was Missing From Acceptance Speeches at the Emmys and VMAs

The MTV Video Music Awards and Emmy Awards this week offered pop culture fans a foretaste of awards season, which...