Muslims in Britain have started a campaign entitled #NotInMyName, referring to ISIS barbarisms in the Middle East. It can at best be described as a disinformation campaign to deceive unaware non-Muslims about the atrociously violent teachings of Islam. 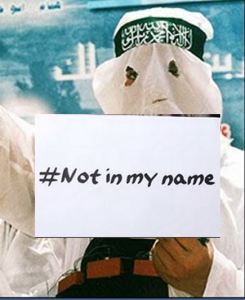 Quoting the organizers of the campaign:

“British Muslims are taking a stand against the Islamic State of Iraq and Syria (ISIS) by launching a social media campaign to deliver an important message: Hate and violence do not represent their religion.”

“Many others are saying the extremists are “hiding behind a false Islam.”

Qadir, one of the organizers, claiming that they were tired of all Muslims being labeled as terrorists because of the groups who commit terrorist acts, said:

“The world does not see that this is not permitted in Islam… We want to tell the world that these groups are no representatives of our faith. Islam has no room for these groups; they hide behind our faith to justify the atrocious acts they commit.”

Similar campaigns have been launched in Germany as well as France. Aiman Mazyek, the head of the Central Council of Muslims in Germany, said:

“The nationwide day of prayer was intended to make clear “terrorists and criminals do not speak in the name of Islam, they have trampled on the commandments of our religion, and that murderers and criminals have no place in our ranks, in our religion,”

Asfar, one of French Muslims organizing the campaign, said:

“What ISIS is doing is against the values of Islam,” explaining that killing people, forcing people to convert to Islam and oppressing women was never part of the Islamic religion.

In another episode, Islamic scholars and Muslim leaders from around the world came together to condemn ISIS and its leader Abu Bakr al-Baghdadi by issuing a letter accusing Baghdadi of failing to respect key tenants of the Islam.

But ISIS is true Islam in action. ISIS is following EXACTLY the teachings of the Quran and the Sunna of Muhammad. They are murdering, raping, enslaving and pillaging just as prophet Muhammad did in up to 100 of his jihad acts and campaigns, himself personally participating in 27 of those. He was a mass murderer, rapist, torturer, terrorist, slaver. Muhammad murdered over 3,000 people, and raped and enslaved thousands. Read about the crimes committed by Muhammad.

In claiming that “Hate and violence do not represent their religion”, “ murderers and criminals have no place in our ranks, in our religion”, and “What ISIS is doing is against the values of Islam” etc., those Muslim campaigners are clearly engaging in deception and outright lies about the teachings of Islam. The fact is: ISIS is acting on commands and teaching of atrocious verses of the Quran such as 47:4, 5:33, 9:29, 9:5. 3:151. For example:

Quran 47:4: “So when you meet those who disbelieve, strike necks until, when you have inflicted slaughter upon them, then secure their bonds, and either favor afterwards or ransom until the war lays down its burdens. That [is the command]…”

Quran 3:151: “We will cast terror into the hearts of those who disbelieve…” 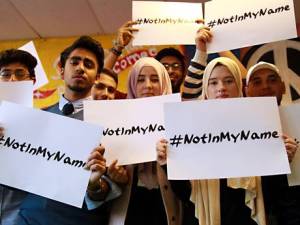 Similar terrorism spurring commands can be found in the traditions of the prophet, for example in Bukhari 4:52.220: “I have been made victorious through terror”.

In fundamental Islam, EVERY WORD of the Quran is from the mouth of the Islamic God Allah, and every Muslim must believe and act up on them. Else they will become apostate.

For the edification of those Muslim campaigner and the Islamic scholars, what ISIS are doing are not any crime in Islamic terms. After all, they are just emulating what the Prophet of Islam committed in accordance of the commands of Allah in the Quran. Therefore, in the eyes of Islam, the ISIS Jihadis are Allah’s anointed holy warriors doing the divine Islamic acts – slaying the infidels and are being slain in the process (Quran 9:111). In sum:

In fact, ISIS choose their every action and policy based on the commands and teachings of the Quran and instances of the prophetic tradition, and any reader of the Quran and Sunnah would have clear idea of that. And this fact should clearly be known to those Muslim organizers and scholars involved in condemning the actions of ISIS. It is therefore clear the organizers of the #NotInMyName campaign are engaged in a patently disinformation and lying campaign to deceive non-Muslims in their effort to distract scrutiny from Islam. 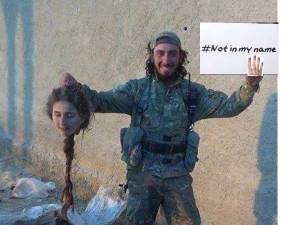 Our world today faces a serious challenge from the barbaric and obscurantist forces of Islam, deriving inspiration from the foundational teachings of Islam. And it jeopardizes the progressive and peaceful future of us all – both Muslim and non-Muslim. What we need from those good-hearted Muslims is not a campaign of disinformation and deception, but honesty and courage to acknowledge the troublesome teachings of the Quran and Sunnah, and a debate about how they should deal with them.

Black Privileges, Thanks to Obama, Could Certainly End the U. S.

By Jerry McConnell  Black people in America, though certainly not all of them but a significant percentage, are seemingly forever...