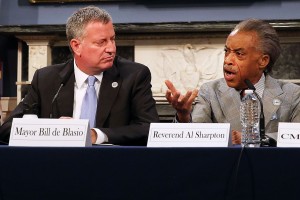 President Barack Obama, Eric Holder, Bill de Blasio, and the Rev. Al Sharpton are fueling the flames of racism in America just as the Ku Klux Klan did 100 years ago. Sounds inflammatory? It is. What’s worse, it’s true.

The reason? They are considered the establishment. They are out in broad daylight perpetrating a racist agenda and, instead of wearing a white sheet to protect their identity, they are shrouded in the cloak of government.

They are adept and skillful at delivering a populist message of redistribution of wealth or how minorities are targeted by the police. Listen my friends, the biggest day of lynchings in America happened to Italians in New Orleans in 1891 in response to nine Italians being found not guilty in the murder of a police chief. A mob dragged those nine Italians and two others from the jail they were being held in and lynched them all.

A March 16th, 1891 New York Times editorial referred to the victims of the lynchings as…”sneaking and cowardly Sicilians, the descendants of bandits and assassins.”

John Parker, who helped organize the lynch mob and later went on to become governor of Louisiana, said of Italians that they were ” just a little worse than the Negro, being if anything filthier in their habits, lawless and treacherous.”

Add to that Italians are Catholics, another thing that added to the hostility toward them. Yes, Catholics were feared and treated very poorly for years. Also, for years the existence of the Mafia had Italians mistreated and held in suspicion by law enforcement.

Actually it still goes on today. But Italians understood that where there is smoke there is fire, and things were happening in their community.

So, instead of becoming victimized and continually whining about ill treatment at the hands of law enforcement, they did what was necessary to provide honest and legitimate help to their people. They weren’t about suppressing the spirit. No, in fact it was empowering it.

Today’s black communities are having a terrible, tragic disservice being done to them by their own leadership. We have a black man as President of the United States. Just the black vote alone would not have elected him… twice! No Italian has ever held that office.

There has been a dangerous pandering to the black communities by certain progressives.  They foster deliberate victimization so that a dangerous political agenda can be furthered. Instead of seeing through this, we have the silent deadly complacency of the media and Hollywood.

Where are the heroic black figures speaking up against what is happening? It feels like we only have figures that wish to widen the divide between our brothers and not continue with the truth and process of healing.

Instead of President Obama leading the nation in healing as a response to the Michael Brown incident and the truth about criminal behavior in our communities… instead of Holder reassuring that our justice system is strong but imperfect… instead of Sharpton asking for calmness and prudence in the behavior of those in Ferguson and New York… instead of the mayor of a major American city showing solidarity with the police force which has the daunting task of keeping that city safe… instead of asking that the communities respect and work together with law enforcement… we see the resurgence of what Bill Ayers and the various terrorist organizations had wanted to do in tearing down our social structure and leaving in its place chaos and the seeds for a Marxist revolution during the ‘60s and ‘70s.

It is no mistake that we see this happening. It is tragic and a part of the revolution Obama has wanted in fundamentally changing America. Yes, Cuba is coming to America. Two innocent police officers have been gunned downed, killed, because New York City Mayor de Blasio, Sharpton, Holder, Obama, the media, and Hollywood have pandered to and deliberately misrepresented the truth to the black community. They must be held accountable, once and for all. Law enforcement and the criminal justice system are not the enemy.

I have written about Ayers and his group before. This is exactly what they wanted. The attack on America is happening from within, and the GOP is just as guilty by their ineffectual behavior. Get ready to be shackled to the plantation of government. The Marxist revolution has taken effect. While I think it is tragic, sad, and wrong what happened to Eric Garner, what I find worse is fanning the flames of hate against all law enforcement.

My prayers and sympathy with the NYPD and the families of the slain officers.

By Theodore Shoebat   The Crusade continues, and will only grow… The city of Moscow has now decreed that there...