Rashad Hussain was previously the Obama administration’s special envoy to the Organization of Islamic Cooperation (OIC), the thuggish international organization that is engaged in a full-scale campaign to intimidate Western governments into adopting hate speech codes that will effectively quash criticism of Islam – including jihad violence perpetrated in its name. Rashad Hussain is an apposite choice for this position, since several years ago he defended a notorious U.S.-based leader of a jihad terrorist group. 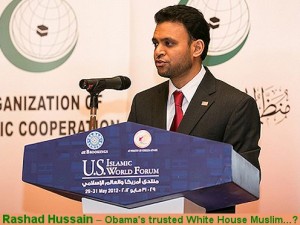 But someone doesn’t want you to know that, and made a clumsy attempt to cover it up.

In 2004, Rashad Hussain, then a Yale law student, declared that the investigation and prosecution of University of South Florida professor Sami al-Arian, who ultimately pled guilty to charges involving his activities as a leader of the terror group Palestinian Islamic Jihad and was recently deported, was a “politically motivated persecution” designed “to squash dissent.”

Hussain’s remarks in support of Al-Arian were published in the jihad-enabling Washington Report on Middle East Affairs in November 2004. But now all that has gone down the memory hole. The Washington Report’s archived version of this November 2004 article lacks two paragraphs that were included in the original version: the ones quoting Rashad Hussain. Otherwise the article is unchanged.

The Washington Report editors, caught red-handed, decided to brazen it out, and blame their accusers – a tried-and-true tactic that is also frequently employed by jihadists in the West. They insist that there was no cover-up, and anyone who thinks otherwise is a venomous Islamophobe: according to CNS News, “WRMEA news editor and executive director Delinda Hanley denied there was a ‘cover-up,’ and implied that anti-Muslim discrimination was behind the fact this was now being raised.”

Sure. It’s just “anti-Muslim discrimination” to be concerned about Rashad Hussain’s support for Al-Arian, a vicious suicide-bombing supporter who chanted “Death to America” and “Death to Israel,” and clearly meant it. When two Islamic Jihad suicide bombers killed eighteen people in Israel in 1995, Al-Arian called them “two mujahidin martyred for the sake of God.”

But there was no cover-up! It was all a mistake, you see: according to the Washington Report now, Sami Al-Arian’s daughter, Laila Al-Arian, actually said the words that were attributed to Rashad Hussain.

But this explanation doesn’t make sense, since the article was altered just to remove the quotes, not to change the name of the person quoted. Also, the author of the original story, Shereen Kandil, contradicts the WashingtonReport’s explanation, telling Patrick Goodenough of CNS:

“When I worked as a reporter at WRMEA, I understood how important it was to quote the right person, and accurately. I have never mixed my sources and wouldn’t have quoted Rashad Hussain if it came from Laila al-Arian. If the editors from WRMEA felt they wanted to remove Rashad Hussain from the article, my assumption is that they did it for reasons other than what you’re saying. They never once contacted me about an ‘error’ they claim I made.’”

Was the Washington Report covering for Rashad Hussain at its own discretion, or at the behest of someone else? Did Barack Obama himself know about this cover-up? Did  someone in the White House or the State Department find out about Hussain’s defense of Al-Arian, and act to cover for the bright young special envoy before this defense was discovered and he became known as a terror apologist? We will probably never know. And now Rashad Hussain heads up a key center supposedly devoted to “countering violent extremism.” What could possibly go wrong?

The Obama administration is revamping its efforts to combat Islamic State (ISIS or ISIL) propaganda. ISIS and its supporters produce “as many as 90,000 tweets and other social media responses every day,” reports The New York Times.

An empowered Center for Strategic Counterterrorism Communications, currently a small component of the U.S. State Department, will spearhead the new campaign to fight the ISIS propaganda machine.

Rashad Hussain, a Muslim American with close ties to the White House, will replace Alberto Fernandez, the center’s director, according to The Times.

Hussain, who has reportedly participated in events linked to the Muslim Brotherhood, currently serves as Obama’s special envoy to the Organization of Islamic Cooperation. He will take over when Fernandez retires in April.

“Hussain, a devout Muslim, has a history of participating in events connected with the Muslim Brotherhood,” reported Cal Thomas in an article published by Townhall.

Some critics describe Hussain as a Muslim Brotherhood sympathizer. He is not a confirmed member of the group.

An added component called the Information Coordination Cell will be part of the newly revamped center.

It will be “staffed by intelligence and Pentagon analysts among others” and “will be responsible for the broader coordination functions.”

“Skeptics of the new [anti-propaganda] campaign voiced concerns that the program is an attempt by the White House to end a long-simmering turf war with the counterterrorism center’s director, Alberto Fernandez, and exercise more control over the kinds of messages that are produced and coordinated with domestic and international partners,” notes The Times.

“Other officials questioned whether even a newly empowered center at the State Department would be up to the task. Operating the center on a shoestring budget of about $5 million a year, Mr. Fernandez, a respected Middle East specialist and career Foreign Service officer, and his supporters have long complained that neither the State Department nor the White House fully supported or properly financed the center’s activities,” the article adds.

The Obama administration plans “to harness all the existing attempts at counter-messaging by much larger federal departments, including the Pentagon, Homeland Security and intelligence agencies,” explains The Times.

White US children will be minorities by 2020 after immigrant ‘baby boom’,

White children will be outnumbered by minority kids in the United States in just five years, new Census Bureau projections...