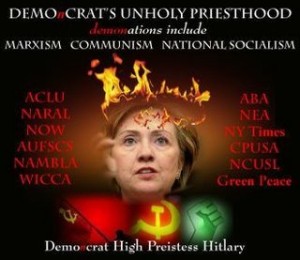 It is said that Old age is a cruel taskmaster and respecter of no mortal being. That fact was refuted for the entire world to see as Hillary Rodham Clinton stood before the press and entertained the adoring troops with lie after lie about her felony misuse of e-mail accounts while “serving” the nation as Secretary of State.

Forced by gnarly Democrats to make a public disclosure about her heretofore unknown obsession with servers, IT matters, and e-mail deletion techniques, the wily old dame from New York may become not only the first woman president, but also the first president of either gender to be implicated in “high crimes and misdemeanors” before actually being elected president!

Could not happen to a more deserving person…the high crimes and misdemeanors, that is!

The woman who was once described as a “congenital liar” by the late William Safire, bobbed and danced around like a drunken pugilist on the run as the assembled cynics pelted her with questions about behavior that could see the Hildabeast headed for a female federal detention center, rather than the Oval Office.

Imagine that: Hillary Rodham Clinton incarcerated while her perverted spouse, Slick Willie, guilty of perjuring himself before the US Supreme Court, remains free to terrorize and harass young lasses in and around New York, Washington, D.C., and perhaps even Little Rock, Arkansas—provided Paula Jones is alive, or still reasonably warm.
To her credit, Hillary did admit to deleting personal e-mails on such private matters as daughter Chelsea’s wedding and her mother’s funeral.

Only a hard-nosed right wing conspiracy freak would take the frail old lady to task for deleting emails about weddings and funerals!

In Case You Missed It:  Freedom of Speech, Just an Illusion?
Posted in Freedoms.

Obama’s Attacks on Religion in America

By Alan Caruba  Americans tend to take the liberties spelled out in the Bill of Rights for granted. This is...