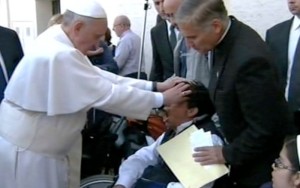 As Barack Obama stumbles and falters in repeated attempts to establish a lasting, positive legacy that can outlive his penchant for ruinous scandals, vile acts of unbelievable stupidity, and mind-numbing behavior that only a reckless tyrant would pursue, the answer to his many woes may be forthcoming from the Vatican and Pope Francis.

To wit, The One needs to forego the ‘old school’ political ploys of the past, in favor of spiritual solutions that can outwit, outlast, and out-guile powerful demons that thrive and prosper in the Devil’s home turf, also known derisively as Washington, D.C.

Recent news from the desk of Pope Francis in the Vatican may offer “Hope and Change” solutions that The One has probably not considered.

As reported, “The tenth annual course on exorcism has gotten off to a bang in Rome, with a full house of 170 students eager to learn how to recognize and fight demonic possession.

Sponsored by the Vatican Congregation for the Clergy and organized by the Sacerdos Institute, the weeklong course titled “Exorcism and Prayer of Liberation” is taking place at the European University of Rome from April 13 to 18.

The course consists in a series of meetings aimed at giving priests, doctors, psychologists, teachers, and pastoral workers the instruments they need to recognize and deal with cases of demonic possession and distinguish them from disturbances of a psychological or medical nature.”

Rather than cow-towing to Islamofascists, especially the crazy Mullahs who run the Islamic Republic of Iran, and kicking God’s chosen people (Israel) in the shins, The One must immediately dismiss the evil Valerie Jarrett, and fill her empty suit with a Pope-approved Exorcist reporting directly to The One himself.

Replacing Valerie Jarrett with an accredited Exorcist could provide the boost needed to get The One through the next 22 months with minimal harm!

In Case You Missed It:  The resistance begins NOW: Global non-compliance movement launched against medical tyranny
Posted in Freedoms.

On the surface, abortion and same-sex marriage may seem unrelated.  However, as explained in an amicus brief of 100 scholars...