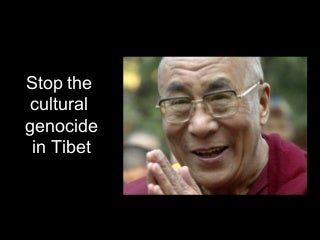 Have you heard about the millions of Chinese flooding into Tibet? With their displacement of the native peoples and the supplanting of Tibetan with Chinese culture, anthropologists and human rights activists have labeled the colonization “cultural genocide.” (See here,here, here, here, and here, for example.) It is a cause célèbre with its own popular bumper sticker.

Interestingly, this situation corresponds precisely to what’s happening in most Western countries—most notably the United States—except for one minor detail:

No compassionate liberal activists call it cultural and demographic genocide.

They call it “diversity.”

Everything else reflects the West’s immigrationist malaise, which is so severe that treason has become the norm all throughout the West. Just consider, for instance, Swedish multiculturalist and anti-Western social engineer Mona Sahlin, who, commenting on the planned Islamization of her land, actually said in 2001, “[T]he Swedes must be integrated into the new Sweden; the old Sweden is never coming back.”

The old Hazleton is likely never coming back, either. There recently was a news story about how the Pennsylvania town has gone from 5 percent to 37 percent Hispanic in just a decade, between 2000 and 2010. Another news piece, one at PennLive.com titled “Not all in Hazleton convinced old town, new immigrants can co-exist happily” (they must be “racists”), points out that “for years, the hospital ran deficits because of the number of people visiting the emergency room who could not pay” and that “when the Hispanic population started to boom in the early 2000s, Hazleton’s crime rate rose….” Of course, I’m sure this is mere correlation. Because we all know that our strength lies in our displac…er, I mean, diversity.

No Compassionate liberal activists call it cultural and demographic genocide…

They call it “diversity.”

One thing we can say about Hazelton’s transformation, at least, is that it was driven by economic and lifestyle factors such as jobs and better neighborhoods. Not so with Obama’s amnesty plan to use illegal aliens—or, if that term is offensive, let’s say, undocumented Democrats—as “seedlings” to further effect the “fundamental transformation” of America. Oh, you haven’t heard about this? Well, it’s not the kind of scheme laid out in official policy papers or analyzed in The New York Times. But the gist of it, talk-show host Sue Payne told us while reporting on a conversation she became privy to involving federal officials, is that “new Americans” (read: “foreigners”) would “navigate, not assimilate” as they “take over the host,” create a “country within a country” and start “pushing the citizens into the shadows” (click here for more). The moral of this story? No one is talking about “assimilation” except suckers, who, it seems, are natural-born every minute.

Speaking of which, it’s certainly tempting to blame all this on Barack Obama. But note that the majority of Hazleton’s transformation occurred under George W. Bush’s watch—not that Mr. Mush deserves all the blame, either. Understand that the die for our fundamental transformation was cast long ago, in 1965, with the Immigration Reform and Nationality Act (gracias, Ted Kennedy). It radically changed our immigration model, creating a situation wherein for 50 years 85 percent of our immigrants have hailed from the Third World and Asia. And if demographics are destiny, we should ponder the almost unprecedented demographic shift the act has wrought. In 1965, whites were almost 90 percent of the population.

Now non-Hispanic whites are down to 63 percent.

Oh, did I mention race? So sorry. I guess I should be sent to that corn field populated by the likes of Jimmy “the Greek” Snyder and James Watson. Except that to the left, this is all about race and ethnicity.

Do you think Mexican-born Univision journalist Jorge Ramos—who recently (and poorly) debated Ann Coulter—and his La Raza soulless mates would make amnesty their raison d’ etre if most of our illegals were white Scandinavians? Don’t kid yourself—ethnic bias animates them.

Then there was the Huffington Compost’s cutsie piece “So You’re About To Become A Minority…,” which gloatingly mentions demographic projections indicating that whites will be a minority countrywide in 30 years. It sarcastically asks “So what’s a privileged white person to do?” and then, “to ease the white transition into life as a minority,” as the Compost puts it, provides a spoof PSA video that mocks white society. Could you imagine leftists taking this approach with one of the manyprimitive tribes facing decimation?

Yet the Compost has nothing on our post-racial president. Obama, who perhaps takes no issue with illegal aliens because, as his Dreams book states, he finds whites “alien,” has overseen a Department of Justice that won’t pursue voting-rights cases in which the victims are white. He also has spoken positively of America’s demographic genocide, though he doesn’t put it in quite those terms. Like Britain’s Labour Party—which, admitted a former Tony Blair advisor in 2009, used massive Third World immigration to “rub the Right’s nose in diversity and render their arguments out of date”—he uses code words. Obama says that because our country is becoming a “hodgepodge of different folks,” because of “diversity,” he’s confident conservatism will be drowned out. My, I’ve always dreamt of living in a hodgepodge. Haven’t you?

Note here that “diversity” has become a code word for, as American Thinker put it, “let’s have fewer white people.” Evidence? While Hazleton’s transformation is portrayed positively as diversity, when the white population of an area increases, it may be called a “bleaching out.” Yeah, The New York Times actually used that term when referring to the white techies moving into San Francisco’s Mission District. I wonder, can we call our wider demographic upheaval “the browning of America”? Or does that make it corn-field time again?

None of this should come as any surprise because leftists are the gurus of group politics, the pashas of polarization. They’ve given us affirmative action, quotas, Ebonics, identity politics, “gender” identity, critical race theory and white-privilege conferences. Then, when someone turns around and sheds light on their race-oriented immigration policy, they try to silence him with screams of “racism!” lest anyone catch on to what they’re really up to.

Race and ethnicity matter because, as Dr. Walter Williams put it, they can serve as a “proxy” for harder-to-observe qualities. A couple of these are ideology and voting tendencies: The groups represented by 85 percent of our new immigrants vote for socialist-oriented Democrats between 70 and 90 percent of the time. Leftist immigrationists are importing their voters—and the destruction of Western civilization.

Of course, demographic and cultural genocide is not only nothing new, but the historical norm. The indigenous Ainus have largely been subsumed by the Japanese; North Africa was once Roman and Catholic, then it was a Germanic Vandal kingdom and later became Arab and Muslim; and we no longer have tribes called the Alans, Langobards, Illyrians, Harii, Thuringii or Sarmatians. Oh, their genes and perhaps even memes are extant in modern populations, but their cultures, per se, are no more.

This may be a bad thing or it may be a good thing—the vanquishing of primitive Aztec culture ended wide-scale human sacrifice—but it is a real thing. When Muammar Gaddafi mentioned in 2006 that “[w]e have 50 million Muslims in Europe,” it wasn’t followed by the lament, “And, man, they’re all gonna’ be assimilated and ‘pop!’ goes the caliphate.” Rather, he astutely noted that “without swords, without guns, without conquest, [they] will turn [Europe] into a Muslim continent within a few decades.”

The people make the culture and government, not the other way around. Import enough Mexicans or Muslims into the U.S. and you no longer have Western civilization; you have Mexico Norte or Iran West. Would this be preferable? If you’ve evaluated south-of-the-border cultures or Dar al-Islam and concluded it would be, then you should accept that “Our strength lies in our diversity” really means “Our strength lies in our destruction”—and welcome it.

This certainly is the left’s perspective. Remember the old Stanford University chant, led by Jesse Jackson, “Hey, hey, ho, ho, Western Culture’s got to go!”? Well, it’s going, going…and will be gone unless we make some profoundly radical changes. It’s cultural and demographic genocide, generally lamented except in the one case in which, labeled diversity, it’s trumpeted.

That would be the case of the one civilization leftists hate with every fiber of their being. 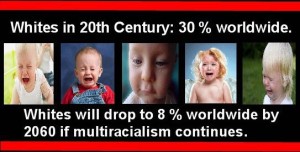 By Arthur Weinreb In recent years a lot of attention has been placed on media bias. Those on the right...