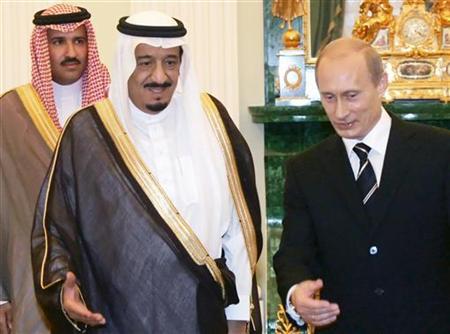 MOSCOW — As two of the world’s biggest oil producers, Russia and Saudi Arabia working together have the potential to dominate the globe’s petroleum markets. So far, that hasn’t happened, as seemingly irreconcilable differences – and particularly US-Saudi relations – have kept them apart.

But all the smiles and deal-making last month between Vladimir Putin and Mohammed bin Salman, the youthful and ambitious Saudi deputy crown prince and defense minister, has some claiming that the two energy giants, driven together by geopolitical crisis, may bet set for a much closer relationship.

Some experts perceive signs of an “emerging partnership” driven by shifting global winds, in which Saudi cash helps Moscow dodge Western sanctions, while Russian arms, engineering expertise, and diplomatic support assist the energetic new Saudi king to wean his country from dependency on an increasingly uncooperative US.

But others argue that, while change is definitely in the air, the outreach is purely tactical and of limited intent on both sides. Vast differences remain, particularly over critical issues such as regime change in Syria and a big power-sponsored nuclear deal with Saudi Arabia’s archenemy, Iran.

“In the past, relations between Russia and Saudi Arabia were very bad, so any movement is going to attract notice,” says Irina Zvyagelskaya, a Middle East expert at the official Institute of Oriental Studies in Moscow. “But I wouldn’t exaggerate this. Everyone is jockeying for a better position, seeking what advantages they can, but there are no earthshaking changes underway here.”

Mr. Putin and Prince Salman sat down for a friendly meeting on the sidelines of a St. Peterburg economic forum last month, where they reportedly signed six deals, including a nuclear cooperation agreement that could see Russia helping to build up to 16 atomic power stations in the desert kingdom. They also are reported to have inked contracts on  space cooperation, infrastructure development, and a deal on high-end Russian weaponry.

For the Kremlin, the effort to establish good relations with a major Mideast player that has long shunned Russia comports well with what Ms. Zvyagelskaya calls “Moscow’s long-standing policy of trying to be friends with everyone.”

She says Western sanctions are a factor leading Mr. Putin to seek new diplomatic openings – and exploit growing Arab frustrations with the US – as he did with a visit to Egypt earlier this year, which also included a Saudi-financed arms deal.

“For Russia it’s very important to position itself as a regional power that can talk to all sides. At the same time, we see that many Middle Eastern states are disaffected with US policies, and they want to have Russia around. For the Saudis, this is mostly about sending a signal to Washington, not switching partners,” she says.

Persian elephant in the room

The biggest bone of contention is Iran.

Currently, Russia, China, the US, Britain, France, and Germany are in down-to-the-wire negotiations with Tehran for an accord that would end Iran’s alleged nuclear weapons program. All signs suggest that Moscow is an enthusiastic backer of that projected agreement, and is actively positioning itself to rush into the Iranian market once the country’s isolation is lifted. It’s already greenlighted a deal to sell S-300 air defense systems to Iran, and another to build up to eight new nuclear power stations in the country.

Experts say that for Saudi Arabia, Iran is going to be the main adversary and existential threat whether it has nuclear weapons or not, and it has been alienated by US support for the accord.

“The Saudis feel they’re in a corner, they can’t trust the US [to counterbalance Iran] anymore, and so they’re playing the Russia card,” says Yevgeny Satanovsky, president of the independent Institute of Middle East Studies in Moscow. “I think they understand in the Kremlin that this is just a big game that will not amount to very much.”

In St. Petersburg Putin invited the Saudi king to visit Russia – which would be a first – while Prince Mohammed invited Putin to reprise his 2007 trip to the kingdom. Mr. Satanovsky says that during Putin’s previous visit to Saudi Arabia, there was much hype about improved relations, and even arms deals, that never panned out.

“It’s all theater. The Saudis do this periodically; apparently they think it will make America jealous,” he says.

The other big issue is Syria, where Moscow continues to back beleaguered President Bashar al-Assad, while the Saudis are bankrolling rebels trying to overthrow him.

There has been some speculation lately that Russia may be distancing itself from Mr. Assad, and has reportedly pulled many of its experts out of the embattled country.  But Moscow recently reaffirmed its support for Damascus, and Russian experts say the evacuation of Russians from the country over the past two months has been mainly due to the deteriorating security situation.

Saudi Arabia has also been angered by a perceived lack of US support for its intervention in next-door Yemen. But there, too, Moscow’s policies – which call for a ceasefire and “national dialogue” – wouldn’t seem to offer much comfort to the Saudis.

Andrei Klimov, deputy chair of the Russian Senate’s international affairs committee, says the mistake many analysts are making is to view shifting relationships in today’s world through a cold war prism, assuming a country must be “in” one bloc, or the other.

“Reality is moving Russia and Saudi Arabia together, to cooperate on issues where we can,” he says. “The Saudis are learning that they can’t rely on the US for everything, and there’s considerable advantage in developing relations with Russia.”

“As countries we’re not much alike, but neither of us shares ‘Western values’ or likes being criticized by the US. We can work together” without upsetting the world order, he says.

In Case You Missed It:  America would gain nothing from starting war with Russia
Posted in Financial and tagged Eastern Europe, Oil, Russia, Saudi Arabia, Vladimir Putin.

By Sonia Bailley No need to worry, the recent Ramadan triple slaughter fest in Tunisia, France and Kuwait has nothing...