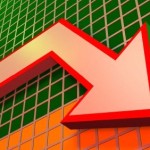 It’s finally happening. The crash season is upon us.

We’ve seen the early signs this week with leading stocks getting the carpet swept out right from underneath them.

That strongly suggests the market has topped and the great crash is in motion. It must be grating on the psyche of any investor who’s dared to stay in stocks this long.

So where do we go from here?

I can promise you, it’s only going to get worse!

Like our economy, there is clear seasonality when it comes to stocks. Trends flesh out overtime. It’s not random. From that data, I want to give you a picture of what the next few months might look like.

The strongest months are July at a 1.5% average gain, with December, April, and January following in that order. The worst performing months are September, May, and February.

One simple reason stocks get slaughtered in September is taxes. Money managers look at their portfolios and scrap the losers to write those losses off to offset the taxes they’d pay on other gains.

But this monthly breakdown masks the fact that such annual downturns often start in mid-to-late August and bottom in early-to-mid October. September carries most of the weight, but those months look better than they actually are.

In the years when we get larger corrections and crashes – as I expect to see during these last drama-spilling months of 2015 and into next year – the odds are much worse. The crash period between mid-August to mid-October tends to be much more extreme.

1987 was a classic example of this. The market topped on August 25, had a minor correction into September 8, a minor bounce into October 2, thencrashed 34% in less than three weeks. It bottomed October 20.

These moves can happen in a flash. The biggest part of that crash happened in just one week: down 31% from October 13 to 20. Black Monday, October 19, saw 20% in one day!

Take a look at this table. It shows when major corrections have occurred during the crash season. Note the largest string of crashes in the last economic winter season between 1929 and 1932.

The sharper crashes typically fall between July and October. Sometimes a larger crash will extend into the end of the year. 1929’s chaotic meltdown extended into November. 1930’s didn’t stop until December. Bigger bubbles need longer to let the air out!

This crash looks imminent. Now more than ever, I believe we saw a top on May 20. Since then we’ve seen a “rounding top” much like we saw into August of 2008 before that crash got nasty. How fitting. The only reason this bubble exists is because we fought off that last one with free money. I guess Mother Nature has a sense of humor.

This is a syndicated repost courtesy of Economy and Markets. To view original, click here.

In Case You Missed It:  Get Ready for the Economic Collapse
Posted in Financial and tagged Economy, Financial, Obamanomics, Recession, Wall Street.

By John W. Lillpop The violence and sub-human brutality openly and proudly displayed by ISIS has shocked and deeply saddened...