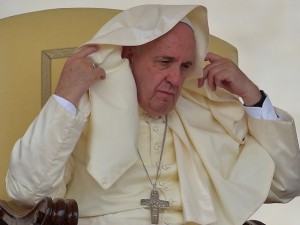 Pope Francis has studiously crafted and nurtured a reputation as a deeply compassionate, caring man who willingly opens his heart and mind to the down trodden, abused, and powerless victims of injustice.

In that regard, it is reported that the Pope plans to speak strongly in advocacy for the tens of millions of foreign illegal aliens who violate US borders and immigration laws, take jobs that should be filled by Americans, and use welfare, health care, food stamps and other social benefits to which they are not entitled, and which cost US taxpayers hundreds of billions of dollars each year.

The Pope reportedly even considered a symbolic walk across the US-Mexico to highlight the struggles of foreign aliens invading America. However, that “dog and pony show” is apparently no longer on the Pope’s itinerary, for reasons unknown.

With all of the grandstanding and political hoopla surrounding the Papal visit, one would expect that Pope Francis would be willing, even eager, to lend a sympathetic ear to the victims of oppression and human rights abuses at the hands of Cuba’s communist leaders, past and present.

After all, the Castro brothers are declared atheists and their abuses should be particularly offensive to a man of God like the Pope.

However, as reported at the reference, Pope Francis is apparently going to deliberately avoid meeting with Cuban dissidents.

“Pope Francis plans to meet with Cuba’s president and its priests, its young and its sick, its churchgoers and its seminarians as he travels around the island starting Saturday. But not its dissidents.

The absence on Francis’ agenda of any meeting with the political opposition has sparked bitter critiques from dissidents who say they feel let down by an institution they believe should help push for greater freedom in Cuba.

“He should exert more pressure,” said Antonio Rodiles, head of the hard line group Estado de SATS. “In many cases political systems have come under international pressure that has resulted in change, and that’s what needs to be happen with Cuba.”

Papal observers say it’s likely Francis will speak strongly to Cubans about the need for greater freedom in their country and may speak to President Raul Castro in private about the same topic. But in shying from meetings with dissidents, the pope is hewing largely to the Cuban Catholic Church’s strategy of advocating for change within bounds laid out by the communist state rather than pushing the system to change as John Paul II did in Eastern Europe. There is no one Cuban officials consider more out of bounds than the country’s dissidents, whom they call mercenaries paid by the U.S. government and Cuban-American interest groups in Miami.

Vatican spokesman Federico Lombardi said this week that Francis had not accepted any invitations to meet with dissidents, and well-known opposition members told The Associated Press they have received no invitation to see him.

Lombardi noted that a possible occasion for bringing up Cuban’s human rights situation could be during Francis’ private meeting with Raul Castro, or while the Vatican secretary of state, Cardinal Pietro Parolin, meets with his Cuban counterpart.

“Often, these types of problems are dealt with in conversations, not so much with public proclamations but in personal, direct or private discussions,” Lombardi said. “The tradition of the Holy See’s authority is to deal with them with a discretion that can often be more efficient than other, possibly more visible but less opportune ways.”

The pope “will be well aware that his not meeting dissidents will be construed in some quarters as kowtowing to the regime but he won’t care about that,” said Austen Ivereigh, author of “The Great Reformer: Francis and the Making of a Radical Pope.”

The big question: Why are the lives of Cuban dissidents living under atheist communists less important that foreign criminal invaders who violate US borders and immigration laws and actively steal from American citizens?
Reference: http://apnews.myway.com/article/201

In Case You Missed It:  Left-wing coastal states led by California forming “abortion alliance” to protect “right” to murder the unborn
Posted in Freedoms.

Iran's covert Parchin army base has long been reported as the key site in Iran's nuclear detonator testing needed in constructing a...