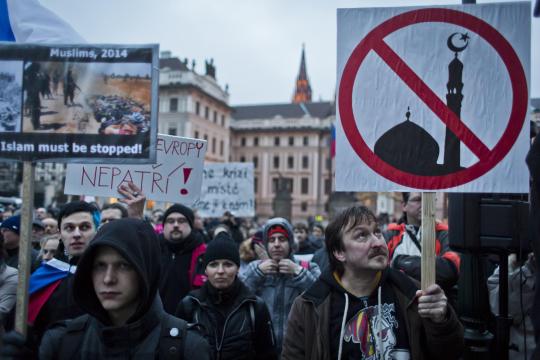 The member states of the European Union that are behind the former Iron Curtain are mounting the strongest resistance against the push to accept refugees, which is being led by Germany. They may eventually face EU fines for their stubbornness, and may even be willing to exit Schengen and/or the EU to avoid having to take their share of migrants. The big question is: could their economies withstand the damage in the event of such an outcome?

Many thanks to JLH for translating this article from Die Welt:

Tough Stance: Czechs and Slovaks Against Refugees and Merkel

Czechia is scaring refugees off with brutal deportation camps. The Prime minister of Slovakia considers the acceptance of immigrants a “crazy idea.” Their goal: stop distribution quotas.

by Hans-Jörg Schmidt in Prague

During the night between Monday and Tuesday, thousands of refugees traveled unhindered from Budapest, through Vienna to Germany. 200 others chose the wrong route. They wanted to go to Germany by way of Slovakia and Czechia. But it ended in the Slovak-Czech border train station Breclav. Units of the Czech police were already waiting for the trains, and took the immigrants off, including 61 children.

They put handcuffs on some of them and shipped them to gyms nearby, Later, they went from these to refugee- or deportation camps. “All we did was uphold our laws and the Dublin Treaty, independently of whatever other countries are doing,” was how the government defended their approach.

The follow-up procedure: If an asylum seeker can be directed to another EU country, he is sent there. The others are interned in deportation camps behind high walls topped by razor wire. They have to surrender all their worldly goods and cell phones and have to pay for the food they receive.

Practically No One Applies for Asylum in Czechia

After about four weeks they are shown the next train station on the way to Germany, and it is determined whether they have money for the ticket. The idea is to get rid of these people as fast as possible. And, as they depart, it would be best if they used their re-possessed cell phones to warn their relatives at home not to set foot on Czech soil. Next to no one who has gone through this kind of camp seeks asylum in Czechia.
The hard line of those in power is supported by the population. 81% of Czechs are strictly against acceptance of refugees. That is tops in the EU. This disinclination is stoked by many politicians. Former president, Vaclav Klaus said online: “If Europe wants to commit suicide by accepting an unlimited number of immigrants, then it should do that. But without our agreement.” Immigration, he says, is “not a human right.” So long as the EU does not say that, he says, the situation becomes ever more dangerous.

The present president, Milos Zeman, compared the flow of refugees to a tsunami. The people, according to him, are largely economic refugees, who should be immediately deported. The Muslim immigrants are especially dangerous, because there are terrorists among them. Czechia did not “invite” these people. And, facing the immigrants themselves, he added, bluntly and harshly: “If you do not want to adhere to the rules we have, then go away.”

Hardened Fronts Before the Summit Meeting

The rhetoric in neighboring Slovakia is similar: “We will not be a part of this crazy idea, accepting everyone with open arms,” protests Prime Minister Robert Fico, reacting against expostulations from the West that Eastern Europe is not showing solidarity. Others are responsible for this misery. Slovakia did not participate with military detachments in the homelands of these people, and therefore did not unleash the streams of refugees.

So his country has no responsibility for the people from there. And, Fico says, the immigrants cannot really be offered a homeland. “There are no mosques here; people would hardly be comfortable with that.” Slovakia, he says, has not even successfully integrated its resident Roma.

The Czechs and Slovaks also intend to strengthen this tough attitude on Friday in Prague at a summit meeting of the leaders of the so-called Visegrád Group, which will also include the prime ministers of Poland and Hungary. They categorically reject quotas for the distribution of refugees, such as the EU is demanding. “My attitude has not changed and will not change,” said Czech chief executive Bohuslav Sobotka.

This is increasingly criticized in the country’s media. Peter Honzejk, commentator of “Hospodafske noviny,” told Die Welt that Czechia and Slovakia could show solidarity and should take more refugees. “Czechia has put aside all of 200 million Kroner (7.5 million euros) toward a solidarity solution to the crisis. That is a ludicrous sum.”

Comments from Austria to the effect that EU funds to the fractious Eastern Europeans should be cut are “stupid and counterproductive.” “They are just spurring on the Czechs who are interested in the destruction of the EU.” His colleague from “Mlada front Dnes,” Lubos Palata, fears that Czechia and Slovakia will bowl themselves out of core Europe and contribute to “Schengen at least being suspended.” For both countries, which are closely tied economically to Germany and Western Europe, this would be “clearly more expensive than the acceptance of refugees.”

Poland Says: No to This Islamic Horde! Stop Hijra!

Below is a video of an “Islamophobic” chant by football fans at the soccer match of Legia Warsaw vs. Zaglebie...