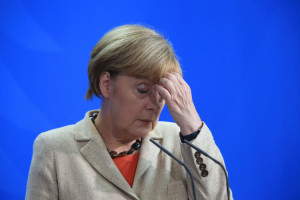 Angela Merkel, Germany’s conservative chancellor, is steering a cautious course between two conflicting pressures. On the one hand she must convince the German people to pay — with their taxes and their lives — for NATO’s Mideast wars. This is no easy task because the misery of two world wars has left them with an aversion to military adventures.

To motivate them to battle, she and the rest of the establishment are demonizing Muslim fundamentalists as mad-dog murderers who must be stopped before they destroy us. They manipulate German guilt feelings about past atrocities by proclaiming that Deutschland now has a humanitarian obligation to defeat these new Hitler-like fanatics who threaten the world.

On the other hand Merkel doesn’t want to stir up too much anti-immigrant sentiment. Four million Muslims live in Germany, five percent of the population. This high immigration is part of German rulers’ deal with their partners in Muslim countries. Emigration of malcontents relieves internal pressure there, helping prevent social anger from building into revolutionary rage. That discontent is an inevitable result of repressive polices that hold the working class in servitude and guarantees high profits. The West also provides these regimes with equipment, finances, and training of military and police there to keep dissent in check.

Here in Germany, immigrants provide cheap labor and more consumers. But they also cause problems. Oppressed at both ends of their life quest, they are fighting back, some with violent tactics. The media call this terrorist war. Angry émigrés see it as helping a holy war against multi-pronged Western aggression in their home countries.

In Case You Missed It:  6 Things People Are Saying in Memory of George Floyd

Europe’s rightwing forces exploit these attacks in order to drum up Islamophobic nationalism. The ruling class distances itself from outright xenophobia because that’s a barrier to neoliberal globalization. But their politicians can’t sound too pro-immigration because they need rightwing votes.

Merkel and other Western leaders are desperately seeking stability in an increasingly polarized environment, trying to maintain balance in a wobbly, unstable system — world capitalism.

To listen to this and other articles from this issue, click here.

By Jim Kouri  At just about the same time the news media swooned over President Barack Obama’s speech at the...