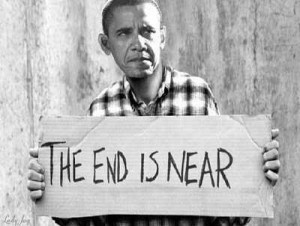 The ongoing saga of President Barack Obama versus the US Constitution, the rule of law, Congress, and the best interests of 330 million Americans continues to grow more bizarre and surreal each day, fueled by The One’s head-first descent into the abyss of emotional and mental insolvency.

In terms of legacy, historians will be forced to choose between two equally gruesome possibilities:

The 44th US President was impeached and removed from office for high crimes and misdemeanors, or

He was declared unfit, mentally and/or emotionally, and removed from office pursuant to the 25th Amendment

In either event, Obama’s diminished capacity will continue to haunt honorable Americans, benefiting only: 1) GITMO detainees, 2) Terrorists affiliated with ISIS, Al Qaeda, and other Islamofascist demons, 3) Uneducated, unskilled, impoverished third world, non-English speaking illegal aliens imported to grow the ranks of the Democrat party, and, 4) Convicted felons from the dredges of society, in cases where the voting rights of said miscreants have been restored by daft, corrupt politicians.

Unfortunately for we the people and the world at large, disposition of the Obama problem will require seldom-seen collaboration and cooperation from patriotic and intelligent Democrat politicians to remove this egomaniacal blight from our midst.

Admittedly, finding Democrat politicians who are both patriotic and intelligent will be a formidable challenge, but one which can likely be achieved, provided massive campaigns of fasting and prayer are staged throughout our blessed land, AND provided that the unstinting support and encouragement of Vice President Joe Biden is assured, despite the fact that Biden is not qualified to lead by virtue of native intelligence.

Despite his considerable shortcomings, Biden is, at this juncture, indispensable to the salvation of our republic and unique cultural heritage.

Politicians of all stripes will be required to shed partisan titles and attendant sympathies and focus instead on the greater good for 330 million Americans, which can only be realized by removing Barack Obama from the Oval Office and sending him, post haste, back to the crime-laden streets of Chicago, or to the pineapple fields of Hawaii, or to the mud shacks of Kenya, or possibly to a GITMO cell made suitable for occupancy by a fallen, and failed, Messiah!

In deciding on an appropriate resolution to the Obama trauma and tyranny, elected officials must give special consideration to the unspeakable carnage brought about by Obama’s adamant refusal to take seriously the threat of Islamic extremists, said denial highlighted by the barbaric murder and maiming of innocent Christmas revelers in San Bernardino.

Obama’s naïve capitulation to the joys of “Morning calls to Prayer” from his Muslim youth must be viewed in light of his illogical, indefensible, and frightening position with respect to bringing tens of thousands of Syrian refugees to America, despite stern warnings from ISIS that such migrations will be infiltrated with “shovel ready” terrorists anxious to add decapitated American heads to their bloody trophy cases!

The time is NOW for Democrats and Republicans to set aside partisan differences, petty and otherwise, and come together in order to remove the greatest threat to a safe and secure America: Barack Hussein Obama!

If nothing else, let’s do it for the children!

France is to close up to 160 mosques in the coming months as part of a nationwide police operation under...