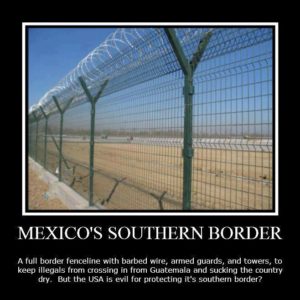 Mexico is allowing Panama to dump nearly 4,000 Cuban migrants on the U.S. border, revealing the hypocrisy of Mexican officials as they attack conservative immigration policies such as Trumps.

The Cubans have been stranded in Panama after Nicaragua closed its border last year, preventing them from traveling north to the U.S., so the Panama government asked Mexican officials if they can simply fly the Cubans just south of the U.S./Mexico border.

“The airlift’s announcement was followed with word Monday that Panama would close its southern border with Colombia to Cubans without visas,” AFP reported, underscoring how both Panama and Nicaragua protect their borders better than the U.S.

It’s certainly revealing how Mexico won’t take in Cuban migrants and expects the U.S. to do so, despite the fact Cubans would likely have an easier time culturally assimilating in another Latin American country.

And it’s also revealing how Mexican politicians refuse to help Cuban migrants while simultaneously attacking Trump for proposing a border wall, acting as if the U.S. doesn’t do enough for illegals even though Mexico routinely abuses their human rights.

“Mexico is one of the countries where illegal immigrants are highly vulnerable to human rights violations and become victims of degrading sexual exploitation and slavery-like practices, and are denied access to education and healthcare,” the U.N. even admitted.

Despite the abuses, few in Mexico are demanding immigration reform.

“Instead, members of Mexico’s fleeing population sometimes become adamantly vocal once they enter the U.S. illegally, and join protests organized by leftist coalitions against our already incredibly lax border policies, but in Mexico, don’t think this type of behavior would be tolerated,” Adan Salazar reported. “For starters, illegal immigrants are barred from upsetting ‘the equilibrium of the national demographics,’ according to Mexico’s immigration policy.”

“Under Mexico’s Immigration Law, illegal immigration is considered a felony punishable by up to two years in prison ‘and a fine of three hundred to five thousand pesos will be imposed on the foreigner who enters the country illegally.’”

In Case You Missed It:  Psychiatrists invent a totally fabricated "stress disorder" to try to explain away vaccine-induced HEART DAMAGE... they claim it's all in your head
Posted in Freedoms and tagged Cuba, Illegal Immigration, Mexico.

A group of students at the University of North Carolina are fighting back against the Obama administration’s civil rights lawsuit...