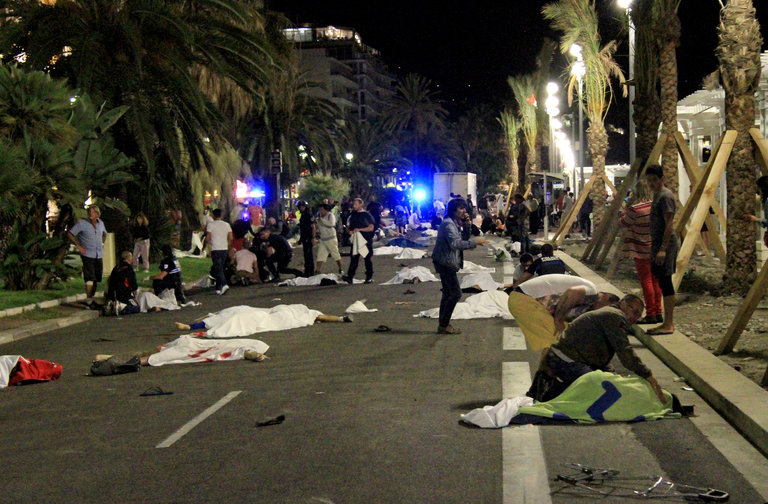 The people who died in Nice were outside to live, to drink, to sing and celebrate. They did not know that someone had declared war on them. But someone did, a barbaric psychopath named Mohammad that lives in the 5th century and founded a sick religions called Islam. He declared war on all non-Muslim and today it continues by his followers.

Many Americans have traveled to Nice, Paris and Brussels and other parts of Europe. Chances are you probably have as well. When a bomb goes off in Baghdad, killing hundreds, as was the case the other day, and it hardly hits the homepage.

As Europe had it doors open to Islamic immigration the sad reality is violence, mass deaths and terrorism are quickly become the new norm for Europe. Nice and the enchanted south of France included brutally besieged by Islamic Terrorism. Once a popular resort city on the Mediterranean coast, to a city with bodies on the streets that run for over a mile, stained with blood and carnage. That story book city in the Cote d’Azur now a nightmare thanks to Islam and Islamic immigration.

The terror attack in Nice has shocked the world yet again. Rough figures reveal something even more appalling, after liberalism allowed massive immigration into Europe far more people have been killed by terrorists in France under leftist socialist president Hollande in the last two years, than in the previous 100 years. Will we put French flags on our Facebook pages again, perhaps keep them up for good until the next attack from Muslims?

They use to call Beirut, Lebanon the Paris of the Middle East, today it is an Islamic cesspool were violence, death and Islamic terrorism are all too common. Will France soon be the new Beirut of Europe, it is looking to be so.

France has has numerous terrorist attacks and it is become more and more common throughout Europe, a new norm all thanks to multiculturalism pushed by the left.

France is becoming militarized under Martial law. Who wants to be sitting in an otherwise charming restaurant in Paris and have heavily armed soldiers in camouflage drift past the window, as I travelers experienced in Paris this year after Islamo fascist killed 130 people in November.

Visiting France with militarized solders surrounding the cities to protect them makes Europe feel more like a third world country under siege, that is because it is under siege by third world immigration to the west.

Europe is rapidly finding out what the Israeli has to live through day by day, why going to a grocery store or a night club involves a security check in much like an airport. How long before the no-go zones in France and other part of Europe demand to be independent Islamic states? Muslims are already calling for separate states in Europe, these no go zones will be the launching area for missiles into European cities onto the European peoples. It sounds crazy, but this reality is not to far off.

The future of Europe looks bleak, many cities once safe and like a storybook soon to have Muslims chanting Allahu Akbar in the street with dead bodies of European laying around. It took only one generation of leftist policies to destroy not only rich cultures, but a continent! We owe it to our grandchildren to pass on a safer prosperous Europe than to to continue down this road to self destruction.

In Case You Missed It:  Get Ready for the Economic Collapse
Posted in Terrorism and tagged Europe, France, Immigration, Islam, Jihadists, Muslims, Terrorism.

How the GOP Senate Is Boosting Obama’s Judicial Legacy

Republican senators consistently accuse President Barack Obama of refusing to follow the law and exceeding his constitutional powers. Yet they’ve...