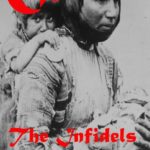 WASHINGTON, DC – In response to this question, Joe David, author of The Infidels, asks another question: Are the international crises, instigated by savage groups like ISIS, the result of conflicting religious views, as many are led to believe, or do they reflect a pattern, which suggests something even more disturbing?

“In order to provide cause-and-effect answers to important world events like this, historians have asked many similar questions over the years,” the controversial author of The Infidels said. “What their conclusions will be after examining today’s headline stories, specifically the brutal slaughtering of ‘infidels’ and the mass movement of refugees out of the Middle East into Europe, can only be conjecture at this point.

“What we have learned from World War I is that the Middle East was a setting for a major war, one which radical Muslims used to cleanse the area of Christians. Like today, this resulted in countless Christians being brutally slaughtered, and countless more being forced to immigrate to other countries. This massacre and the forced mass exodus of Christians, initiated then by Turkish leaders, was done primarily for one reason: to advance their imperialistic dream of rebuilding a crumbling Ottoman Empire.”

In the Infidels, the author personalizes this historical truth by telling a moving story about his Assyrian mother who was deeply affected by this World War I genocide. Like so many Christian refugees today, she too had to abandon her privileged and comfortable life in order to escape the unspeakable horrors of war.

Despite the differences in spin, the author asks: “Does the savage slaughtering of Christians that occurred then have any similarity to what is occurring now? When closely examined by historians, will my mother’s story parallel the present?” David asks. “Is this ISIS led crisis, which is spreading rapidly to Europe, a deliberate distraction to conceal a major and more evil plot, or is it the story?”

In the well-researched historical novel, The Infidels, the author plants the needed background for a reader to draw his own conclusion. A new edition of The Infidels is available world-wide (ISBN: 978-0-939360-08-6) through Books for All Times. An eBook version will be available soon (ISBN: ISBN 978-0-939360-09-3).

For more information, visit www.bfat.com; for the author’s youtube interview, visit: https://www.youtube.com/watch?v=fqhsEJecdD0; and for a two-part article on background history, “Silencing the Past,” visit: http://www.israelnationalnews.com/Articles/Article.aspx/17457#.V08P05v2bVI.

By Robert Lauriehttps://twitter.com/FoxNews/status/765216954890072064/video/1 Dear media outlets, All the violence we’ve been witnessing in Milwaukee for the last few days? Yeah,...