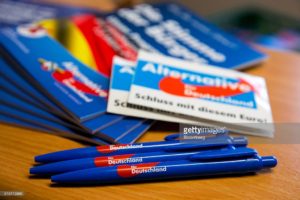 The Alternative for Germany (AfD) logo sits on pens as election campaign leaflets sit on display inside the party’s campaign office in Magdeburg, Saxony-Anhalt state, Germany, on Monday, Feb. 29, 2016. While Chancellor Angela Merkel’s Christian Democratic Union (CDU) has a chance to win the contests in Baden-Wuerttemberg, Rhineland-Palatinate and Saxony-Anhalt, a strong showing by the anti-immigrant Alternative for Germany party would risk increasing opposition to her open-door policy within her party. Photographer: Krisztian Bocsi/Bloomberg

According to the latest estimates by the German ZDF channel, the AfD has received over 21 percent of the vote in the local elections in the state of Mecklenburg-Vorpommern.

Indisputably, NATO’S 13 years of military actions in the Middle East led to the humanitarian and refugee crises that morphed into millions of high risk migrants storming Europe’s shores . Chancellor Merkel decided, as has Ms. Clinton, to maintain NATO’s regime-changing crusade. It could turn out to be her undoing.

Ms. Clinton has vowed to continue this NATO crusade, even as it breeds chauvinist sentiments, destabilizes liberal governments in Europe, endangers the EU, empowers Turkey, and creates a politically resurgent Russia. These developments mean that there are self-inflected, troubling times ahead for the US.

This isn’t pretty for us,” said Michael Grosse-Broemer, one of Merkel’s top deputies in parliament in Berlin in a ZDF TV interview. “Those who voted for the AfD were sending a message of protest.”

Merkel’s approval rating has plunged to a five-year low.

his is a slap in the face for Merkel,” AfD co-leader Frauke Petry said.

“The voters made a clear statement against Merkel’s disastrous immigration policies. This put her in her place.”

According to German officials, the country welcomed over 1 million refugees in 2015. The AfD has managed to gain voters from various parties, according to Petry.

Now under pressure for the first time in five years, Germany has begun contemplating the idea of sending migrants back to Greece as Chancellor Angela Merkel’s national popularity plummets from public outcry against her open door policy, a political shift that may have lasting reverberations throughout the European Union.

Other European countries have taken a much harder line on immigration in the last year, most notably Hungary where Prime Minister Viktor Orban has called for a total ban on migration and draconian measures to prevent “Islamization” of the country.

Time could be running out for waves of refugees to enter Europe, the president of the European Union warned on the sidelines of the Group of 20 summit on Sunday.

“The practical capability of Europe to host new waves of refugees, not to mention irregular economic migrants, is close to limits,” Donald Tusk said at a news conference.

SWITZERLAND’S ruling political party has announced plans to try and curb the flow of people into the country by quitting the Schengen Zone.

The Swiss People’s Party (SVP) has unveiled new proposals to try and halt the movement of migrants around the European Union.

Vice President Christoph Blocher made the shock statement after a parliamentary panel rejected the government’s threat to impose quotas on the number of foreigners entering the country next year, they said no more migrants.

In Case You Missed It:  DEPOPULATION TARGETS TAIWAN: Birth rates over the past year have dropped 23% in Taiwan, following blind obedience to covid vaccines
Posted in Freedoms and tagged Chancellor Angela Merkel, Election, Europe, Germany, Migrants.

By Christopher J. Green “Here we go again” I thought as I read through media reports about the latest atrocity...