The fascist left are in full swing rioting in towns, making mass protests over a Donald Trump win for U.S president. 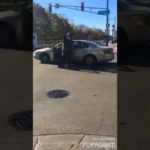 Liberals say they are concerned about Trump being racist and treating people of certain races unfair. The reality is it is the intolerant liberals is who we all should be fearing.  This is not the first case of a man being beating because he supports Trump, and is white.

This past summer we saw rioters in the Black Lives Matter movement targeting white drivers to pull them over for a beating,  one man from Serbia was murdered by these intolerant leftist thugs.

We can be thankful Hillary Clinton did not win and see the continued violence and intolerance coming out of the left, violence that Obama seemed to cheer on in support. Hopefully Trump can bring us together where Obama divided us into skin colors, as the left is notoriously known for doing.

This Video has gone viral online showing a white man in Chicago being pulled out of his car a brutally beaten by Hillary Clinton supporters because he voted for Donald Trump and is White.

YouTube is systematically removing all copies of the video saying: “This video has been removed for violating YouTube’s policy on harmful or dangerous content.” We have included a mirror for below so you can watch the clip.

In Case You Missed It:  If You Are Vaccinated and You Fear the Un-Vaccinated, You Might Be a Moron
Posted in Tyranny and tagged blacks, Democrats, Racism.

Last Friday, crowds of Muslims attacked Hindu temples in Nasirnagar and surrounding areas, provoked by a picture posted on Facebook...