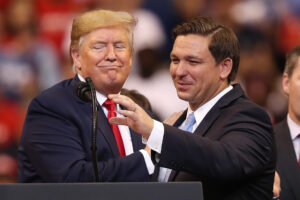 A Donald Trump/Ron De Santis dream ticket is being touted for the Republican challenge for the 2024 Presidential Election in MAGA circles. Supporters of Donald Trump and Ron De Santis see this ticket as being the most powerful and potent combination to defeat Joe Biden or some other Democrat hopeful in this eagerly awaited contest.

Many Trump and MAGA ( Make America Great Again) fans still feel bitterly aggrieved and angry about the manner of Trump’s supposed defeat in 2020 by Biden, and claim that voting machine fraud, mail in ballots, and cheating by Democrats denied their man a second term in the White House, and others feel that President Trump was subjected to a non stop vendetta and two failed impeachments, throughout his term of office by Democrat representatives and conspirators, aided and abetted by Globalist overlords and political collabarators in the FBI, CIA and Justice Department, as well being politically assassinated by Republicans Rinos like Mike Pence, Mitch McConnell, Lindsey Graham and Kevin McCarthy to name but a few.

In short Trump never stood a chance, given the Democrat Conspiracy and the countless numbers of traitors and co-conspirators within his own ranks, ranging against him from day one.

Still, the meteoric rise of Florida Governor Ron De Santis and his championing of MAGA values and principles, and his outright attacks on the Democrat establishment and its WOKE and ultra left wing agendas, has endeared him to the hearts and minds of the Trump train, giving them great hope and aspirations that a Trump/ De Santis Republican ticket, will be the gateway to winning the Presidency again in 2024, vindicating President Trump and giving him his rightful place in the Oval Office once more.

In Case You Missed It:  Sell out: Elon Musk says independent media will stay banned on Twitter; only "trusted" media outlets allowed
Posted in Freedoms.

Surveillance video released on Tuesday shows the moment a 23-year-old graduate of Temple University gunned down and murdered in Democrat-run...