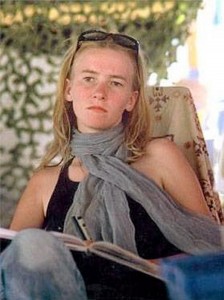 On March 16, 2003, 7 years ago today an activist with the International Solidarity Movement was run over by an Israeli bulldozer which many claim was trying to dear down a Palestinian house in Rafah, near the Gaza-Egyptian border, a hotbed for weapons smuggling. Her name was Rachel Corrie.

Photos of the incident, distributed by Reuters, supposedly showed the event in sequence. One photo showed Rachel Corrie standing in front of a bulldozer, megaphone in hand and visible to the driver. The next photo showed her down on the ground after being struck by the bulldozer, leading the reader to believe that she was intentionally killed. The Christian Science Monitor captioned the first photo as being “moments before” Rachel was killed. CNN and The New York Times portrayed it similarly (all three later issued corrections).

Immediately, some skeptics began to point out inconsistencies between the two photos. The bulldozers pictured are of a different make, as is the Rafah skyline and the nearby land. Their suspicions were confirmed when Joe Smith, an activist with the International Solidarity Movement, revealed that the photos were taken one to three hours apart.

Smith also stated that Corrie was “[sitting] at least 15 meters in front of the bulldozer … waving her arms and shouting.” Also, the armed bulldozer which was used has windows that are “very small and the visibility is very limited” according to a statement released by the Israel Defense Forces. It certainly paints a different picture than a clearly visible woman standing with a megaphone, doesn`t it?

So let`s get this straight. Rachel Corrie was standing, sitting, on a mound of dirt and on the bulldozer`s plow — all at the same time? Amazing! Doesn`t it strike you as odd that these people, who can`t even agree on what exactly happened that day, are fixated on the conclusion that Corrie was intentionally murdered by the IDF?

According to the IDF, the incident was no murder, but rather an accident. The driver and his commanders were interrogated “with the use of polygraph tests and video evidence” and it was found that they “had no knowledge that [Corrie] was standing in the path of the tractor.” An autopsy showed that Corrie`s death was caused from falling debris.

But the ISM isn`t buying it. They must know something we don`t, right? After all, they are reasonable peace activists, right? Right?

That`s what the media are telling you, at least. Several news organizations insist on referring to Corrie as a “peace activist” and the International Solidarity Movement as “peace activists.” But is this true? A close look indicates otherwise.

Can anyone actually keep a straight face while calling a person who advocates the mass murder of innocents a “peace activist”?

According to the Jordan Star, Adam Shapiro, one of the founders of the International Solidarity Movement, “justifies the Palestinian armed resistance against Israel as long as it is targeting Israeli soldiers and Jewish settlers in the West Bank and Gaza Strip.”

Susan Barclay, a coordinator with the International Solidarity Movement, has admitted to working with Hamas and Islamic Jihad. In an interview with the Seattle Post-Intelligencer, she foolishly claimed that “[The ISM] is open to working with any political party as long as they are

Apparently it did not occur to Barclay that these organizations she views as non-violent have murdered hundreds of Israeli civilians and injured thousands more.

Sadly, it doesn`t stop there.

It doesn`t stop there, either.

In March, Israeli intelligence led the IDF to believe that Shadi Suka, a suicide-bomb recruiter for Islamic Jihad, was hiding in the ISM office in Jenin. Israeli soldiers searched the office (after Susan Barclay initially refused them entrance) and found him hiding there. The ISM people later claimed they didn`t know who he was and that he simply had come to them for help.

But what about Corrie herself? Two photos were snapped by Associated Press photographer Khalil Hamra of Corrie angrily burning a mock American flag in front of Palestinian children during an antiwar protest on February 15. Also in February, Corrie wrote that “more Martyrs are ready to defend the honor of Palestine” — this after, in her words, “fighters” killed “two of the illegal occupying force.”

As noted above, Rafah, where Corrie was killed, is a hotbed for weapons smuggling, and Israeli bulldozing of houses and structures was done as a preventive measure against this. According to Amir Segev-Sayag, a media officer for the Israeli consulate in San Francisco, the bulldozer was in Rafah “as part of an effort to prevent terror-related activities.” He also said that the bulldozer was attempting to remove shrubbery to expose these tunnels, not to raze a Palestinian house.

An autopsy of Corrie’s body revealed that the cause of death was from falling debris and not from the tractor physically rolling over her. It was a tragic accident that never should have happened.”

“The International Solidarity Movement, to which Corrie belonged, was directly responsible for illegal behavior and conduct in the area of Corrie’s death and their actions directly led to this tragedy.

In Case You Missed It:  9-11-2001 NEVER FORGET
Posted in Israel, Terrorism and tagged Hamas, Israel, Palestinians.

UK Muslim Leader: Islam Not a Religion of Peace

If the stakes were not so high, the situation with Islam in the West would be comical. First we hear...