You thought you weren’t doing anything wrong, so why should you care about who they call a terrorist? Well, you may not believe it, but you’re likely a terror suspect in America’s new paradigm of the Land of the Fear. 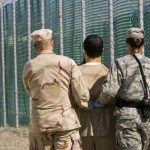 The government is casting a wide net over its citizens in its search for potential threats. Now, you don’t need to actually commit a crime to be hauled away to a detention center and held without charges while you are tortured; you just need to appear suspicious by sympathizing with anti-government views to be labeled a domestic terrorist.

First, it’s important to understand the official definition of domestic terrorism in the United States. The ACLU reports that a person is a domestic terrorist if they engage in any “act dangerous to human life” that “appears to be intended to (i) to intimidate or coerce a civilian population; (ii) to influence the policy of a government by intimidation or coercion; or (iii) to affect the conduct of a government by mass destruction, assassination or kidnapping.”

Although recent White House action plans claim to be targeting “violent extremism in all its forms,” the government itself is clearly guilty of countless “acts dangerous to human life intended to coerce the civilian population, to influence the policy, and to affect the conduct of a government.”  But that’s for another article.

What’s more disturbing, is the government’s expansion of guilty parties to “terrorist sympathizers.”  This is where the net gets really large.  What exactly constitutes sympathizing with a terrorist? Is questioning the imperial foreign policy and the destruction of civil liberties, sympathizing with the enemy?  In the U.S., it seems that if you don’t agree with the violence and coercion America commits, then you’re an anti-American terrorist sympathizer, as evidenced by peace organizations being added to terror watch lists.

So, what makes you a terror suspect in America? Here are 10 ridiculous things that make you a terrorist according to “officials” running the U.S. government:

Tea Party Activists: The political Left demonized peaceful Tea Party activists as right-wing extremists, leading to the second most powerful official in the U.S. government, VP Joe Biden, to liken them to terrorists.   Do you sympathize with those who are angry about bank bailouts on the backs of taxpayers? Well, you’re likely a terrorist in the eyes of the State.

Occupy Activists: Now, the “Occupy” movement, said to be made up of left-wing extremists, is enjoying the same treatment as the Tea Party’s right-wing extremists.  The United Kingdom has officially labeled “Occupy” demonstrators as domestic terrorists. The U.S. hasn’t gone quite that far, but the violent Police State did spy them in search of “domestic terrorists.” Watch out, you may be a terror suspect if you sympathize with the 99%.

7 Days of Food: The Department of Justice and FBI considers you a terrorist threat if you have more than 7 days of food stored, as explained by Rand Paul on the Senate floor:

Paul was referring to an official FBI/DOJ flyer given out to business owners to help them identify potential threats. And recently, Federal agents went to food storage facilitiesdemanding customers lists, while citizens were harassed by the government with door-to-door “assessments” of their preparedness.

Missing Fingers: The document referred to by Rand Paul above, also claims that if someone is missing a finger or has burn marks, they’re more likely to be a terror suspect.
Buying Flashlights: Also from the same official source, if you’re buying night-vision devices including flashlights, you should be considered a terror suspect.

Paying Cash at Hotels: Watch out if you want to pay with cash for hotel rooms.  This DHS commercial indicates that you’re a terror suspect if you do:

The DHS has also launched their citizen spy program for hotels and has sent them hotel protection guidelines which lists suspicious activities like persons carrying observation equipment or standing around in the same area.

Texting Privately in a Public Place: According to this DHS commercial for their citizen spy program, if you’re texting while sitting in a public park, but trying to keep it concealed from people who pass by, you should be reported for suspicious terrorist activity:

Ron Paul Stickers: A 2009 law enforcement report from the Missouri Information Analysis Center (MIAC) labeled Ron Paul supporters, Libertarians, and people sharing movies about the Federal Reserve as “domestic terrorists.” When supporters of a political candidate who stands for peace and freedom become terror suspects, America is in big trouble.

Belief in Conspiracies — Obama’s Information Czar, Cass Sunstein, has identified those who hold conspiracy theories as targets for online “cognitive infiltration.”  Do you question the motives for war?  Question the motives of the private Federal Reserve bank?  Question any government policies? Chances are you already have been marked as a suspect.

Own Precious Metals – Despite the fact that the Federal Reserve paper note (a.k.a. the dollar) is only sustained by faith, you could now be a suspected terrorist if you would like to preserve your wealth with something that holds real value like precious metals.  And forgetabout establishing an alternative currency made from silver or gold like Bernard von NotHaus as you may be lumped into a “unique form of terrorism.”

And now the bonus round for being registered as a potential terrorist — #11– Owning guns and ammo. Let’s face it: you disagree with the American government colluding with international banks to rob you blind AND you’ve armed yourself?  This also why returning veterans have also been labeled potential terrorists — they have guns, know how to use them, and may be angry about the lies that sent them to war.

As the Fast and Furious scandal has now revealed, it was done with a premeditated strategy to vilify the Second Amendment to the nation’s Constitution. Wait — actively planning to undermine the founding document of the country and plot criminal activity against citizens to spread fear and increase political power?  Should that be considered under the definition of terrorism. . . .?

Sen. David Vitter on Drilling, Jobs and the Deficit

Few people have been more vocal about the challenges facing offshore drilling in the Gulf of Mexico than Sen. David...