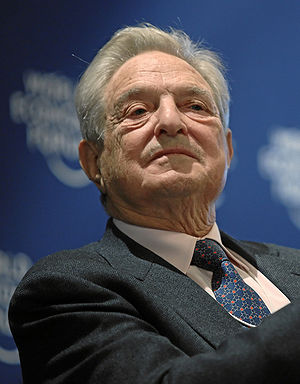 Billionaire financier George Soros thinks that, if Mitt Romney wins the presidency, there will be “little difference” between him and Barack Obama in the White House.

Soros offered the reassuring news to liberals across Europe during an interview this week in Davos, Switzerland.

As policymakers from Hong Kong to Canada pressed Greece and its creditors to strike a deal to cut the nation’s debt, Soros pressed in on GOP presidential candidate Romney:

“Well, look, either you’ll have an extremist conservative, be it Gingrich or Santorum, in which case I think it will make a big difference which of the two comes in,” Soros told Reuters in a videotaped interview.

“If it’s between Obama and Romney, there isn’t all that much difference except for the crowd that they bring with them.”

Soros added, “Romney would have to take Gingrich or Santorum as a vice president and you probably have some pretty extreme candidates for the Supreme Court.”

“So it won’t be that great a difference,” he concluded, if Romney becomes president.

Soros also told Reuters that many hedge fund managers in the United States are backing Romney because Obama wants to raise their taxes.

Soros predicted that “there won’t be a great deal of enthusiasm on either side of the battleground. It will be more civilized than the previous elections have been.”

In the end, the Republican primary is about who will beat Barack Obama and who we want to beat Barack...