The supposed ‘consensus’ on man-made global warming is facing an inconvenient challenge after the release of new temperature data showing the planet has not warmed for the past 15 years. 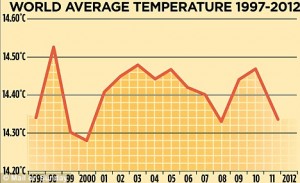 The figures suggest that we could even be heading for a mini ice age to rival the 70-year temperature drop that saw frost fairs held on the Thames in the 17th Century.

Based on readings from more than 30,000 measuring stations, the data was issued last week without fanfare by the Met Office and the University of East Anglia Climatic Research Unit. It confirms that the rising trend in world temperatures ended in 1997.

According to a paper issued last week by the Met Office, there is a 92 per cent chance that both Cycle 25 and those taking place in the following decades will be as weak as, or weaker than, the ‘Dalton minimum’ of 1790 to 1830. In this period, named after the meteorologist John Dalton, average temperatures in parts of Europe fell by 2C.

However, it is also possible that the new solar energy slump could be as deep as the ‘Maunder minimum’ (after astronomer Edward Maunder), between 1645 and 1715 in the coldest part of the ‘Little Ice Age’ when, as well as the Thames frost fairs, the canals of Holland froze solid.

Yet, in its paper, the Met Office claimed that the consequences now would be negligible – because the impact of the sun on climate is far less than man-made carbon dioxide. Although the sun’s output is likely to decrease until 2100, ‘This would only cause a reduction in global temperatures of 0.08C.’ Peter Stott, one of the authors, said: ‘Our findings suggest a reduction of solar activity to levels not seen in hundreds of years would be insufficient to offset the dominant influence of greenhouse gases.’

These findings are fiercely disputed by other solar experts.

‘World temperatures may end up a lot cooler than now for 50 years or more,’ said Henrik Svensmark, director of the Center for Sun-Climate Research at Denmark’s National Space Institute. ‘It will take a long battle to convince some climate scientists that the sun is important. It may well be that the sun is going to demonstrate this on its own, without the need for their help.’

He pointed out that, in claiming the effect of the solar minimum would be small, the Met Office was relying on the same computer models that are being undermined by the current pause in global-warming.

CO2 levels have continued to rise without interruption and, in 2007, the Met Office claimed that global warming was about to ‘come roaring back’. It said that between 2004 and 2014 there would be an overall increase of 0.3C. In 2009, it predicted that at least three of the years 2009 to 2014 would break the previous temperature record set in 1998.

So far there is no sign of any of this happening. But yesterday a Met Office spokesman insisted its models were still valid. 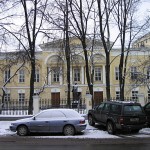 ‘The ten-year projection remains groundbreaking science. The period for the original projection is not over yet,’ he said.

Dr Nicola Scafetta, of Duke University in North Carolina, is the author of several papers that argue the Met Office climate models show there should have been ‘steady warming from 2000 until now’.

‘If temperatures continue to stay flat or start to cool again, the divergence between the models and recorded data will eventually become so great that the whole scientific community will question the current theories,’ he said.

He believes that as the Met Office model attaches much greater significance to CO2 than to the sun, it was bound to conclude that there would not be cooling. ‘The real issue is whether the model itself is accurate,’ Dr Scafetta said. Meanwhile, one of America’s most eminent climate experts, Professor Judith Curry of the Georgia Institute of Technology, said she found the Met Office’s confident prediction of a ‘negligible’ impact difficult to understand.

‘The responsible thing to do would be to accept the fact that the models may have severe shortcomings when it comes to the influence of the sun,’ said Professor Curry. As for the warming pause, she said that many scientists ‘are not surprised’.

She argued it is becoming evident that factors other than CO2 play an important role in rising or falling warmth, such as the 60-year water temperature cycles in the Pacific and Atlantic oceans.

‘They have insufficiently been appreciated in terms of global climate,’ said Prof Curry. When both oceans were cold in the past, such as from 1940 to 1970, the climate cooled. The Pacific cycle ‘flipped’ back from warm to cold mode in 2008 and the Atlantic is also thought likely to flip in the next few years .

Pal Brekke, senior adviser at the Norwegian Space Centre, said some scientists found the importance of water cycles difficult to accept, because doing so means admitting that the oceans – not CO2 – caused much of the global warming between 1970 and 1997.

The same goes for the impact of the sun – which was highly active for much of the 20th Century.

‘Nature is about to carry out a very interesting experiment,’ he said. ‘Ten or 15 years from now, we will be able to determine much better whether the warming of the late 20th Century really was caused by man-made CO2, or by natural variability.’

Meanwhile, since the end of last year, world temperatures have fallen by more than half a degree, as the cold ‘La Nina’ effect has re-emerged in the South Pacific.

‘We’re now well into the second decade of the pause,’ said Benny Peiser, director of the Global Warming Policy Foundation. ‘If we don’t see convincing evidence of global warming by 2015, it will start to become clear whether the models are bunk. And, if they are, the implications for some scientists could be very serious.’

Obama Administration Picks Fight with Conscience; Congress Can Fight Back

A remarkable page in the history of American conscientious objection is being written by citizens throughout the United States who...