The IDF said late on Monday it is ready for major ground incursion into Gaza. 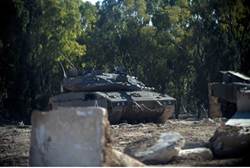 “The IDF is prepared for any development, including a situation where we are forced to launch a ground operation,” IDF Spokesman Brig.-Gen. Yoav Mordechai told Army Radio Monday night.

“We have everything we need and are ready to step it up if needed. There are many measures that we haven’t employed yet,” Mordechai said.

“There is no effective control in Gaza, and no clear distinction between the political and military wings of Hamas… we are prepared to turn it up a notch,” he added.

Mordechai’s remarks come as the IDF attempts to deal with a dramatic escalation in rocket fire from terror groups in Gaza, who have fired some 200 rockets at Israel’s southern communities since Friday night.

Israel’s retaliatory strikes – and strikes targeting terrorists attempting to launch more rockets – have resulted in 25 killed in Gaza. IDF commanders say many of those killed were civilians whom terrorists firing rockets from densely populated areas were using as “human shields.”

However, senior security officials close to Netanyahu have indicated no such operation will be undertaken in the immediate future.

Minister of Strategic Affairs Moshe Yaalon also indicated a ground operation was unlikely on Monday, saying “At this point we see no need to enter Gaza, but the possibility exists.”

Critics of Israel’s airstrikes-for-rockets strategic paradigm say it has only served to perpetuate the poor security situation in Israel’s south.

In recent months Israel’s top military commanders and security officials have increasingly referred to a large-scale ground operation aimed at uprooting the terror infrastructure in Gaza as “inevitable.”

Meanwhile, many cities in Israel’s south have declared further school closures for Tuesday as rocket fire continues, while the Foreign Affairs and Defense committee has called on the government to declare a “special situation” in the south so that families in the region can be compensated for disruptions in their daily lives.

Our guest post from the IDF revealed how a photo, allegedly depicting the results of Israeli air strikes in Gaza...