Iranian President Mahmoud Ahmadinejad has surpassed previous acts of chutzpah and tells German television the Holocaust “was a colonialist plan that resulted from a lie” that Israel exploits to suppress Palestinian Authority Arabs. 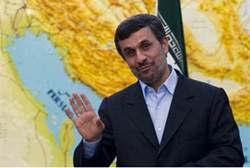 Ahmadinejad: Our nuclear program is for peace

Speaking through an interpreter to Germany’s ZDF public television, Ahmadinejad asserted that Jews “never were rulers of this land. They made a story named Holocaust, and the Palestinians have to pay the price for it.”

The World Jewish Congress (WJC) urged Germany to recall its ambassador to Iran to protest the statements in the interview, which also was posted on the television network’s’ website.

“Over many years Ahmadinejad has been publicly denying the mass murder of European Jewry, and few people still bother to react. His conspiracy theories about the ‘Zionists’ are delusional and anti-Semitic,” said WJC Vice President Charlotte Knobloch.

In the same interview, Ahmadinejad was asked about nuclear weapons and took a “Who me?” approach. He said, “We would never build an atomic bomb — but if we did build one, we wouldn’t be afraid to. If Ahmadinejad were to build a bomb, he would announce it — and he would not be afraid of anybody.”

With a straight face, he stated, “We are against this nuclear bomb on principle,” and added that nuclear weapons are “amoral.”

“It would be very dangerous to believe even a word of what he says, given that Ahmadinejad has misled and ridiculed Germany and the international community shamelessly over the past years,” Knobloch responded.

Besieged gunman Mohammad Merah boasted to police negotiators that he has no regrets beyond having run out of time for...