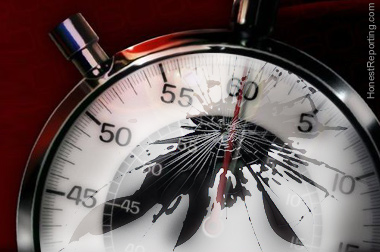 The status of Christians in Israel, the West Bank and Gaza has been featured in the media on numerous occasions. The April 22 edition of CBS’s 60 Minutes, however, presented an unbalanced picture blaming Israel for virtually every difficulty experienced by Palestinian Christians.

After watching the segment, one is left with the impression that Christians are being deliberately targeted by malevolent Israeli policies when nothing could be further from the truth. Undoubtedly, Palestinian Christians are affected by Israeli security measures such as the West Bank security barrier, referred to by Bob Simon as a “wall” despite the majority of the structure consisting of chain-link fencing.

Palestinian Christians, once a powerful minority, are becoming the invisible people, squeezed between a growing Muslim majority and burgeoning Israeli settlements.

Could Israeli settlements really be responsible for the plight of Palestinian Christians? Or is it due to issues that Bob Simon fails to fully investigate?

Simon refers to settlements to explain the plight of Palestinian Christians. But his analysis is naive and demonstrates a weak grasp of the issues he’s presenting.

Reporters with more experience reporting on the region repeatedly point to the suppression of voices critical of the Muslim majority in Palestinian cities.

The number of Christians in the West Bank is on the decline. While some leave for economic reasons, many speak of persecution by the Muslim majority, but always anonymously, fearing retribution.

Justus Reid Weiner has researched the plight of Christians in the Palestinian territories extensively. According to Weiner, Arab Christians rarely speak about their situation in public:

Ha’aretz looks at Israeli reaction to the broadcast even before it was aired:

“We conducted a thorough examination and we found out that no official Israeli source was asked to comment on the assertions in the report,” an Israeli diplomat said.

Israel’s embassy in Washington met with “60 Minutes” several times and found that the report was almost ready for broadcast. In one of the meetings with the investigative reporters, an Israeli diplomat presented an issue of Newsweek with a cover story about the persecution of Christian communities in Arab states.

“The ’60 Minutes’ reporters said that this was not the subject of their article so it was not relevant,” said an Israeli diplomat.

How could Muslim persecution of Christians not be relevant to the subject matter? And how could a supposedly credible media outlet initially fail to consider asking Israeli officials for their views?

For more information on the status of Christians in the Holy Land, read Michael Oren’s article in the Wall St Journal.

The twenty per cent polled by Marine Le Pen in the recent first round of elections in France has come...