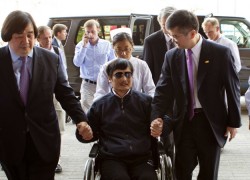 Chinese activist Chen Guangcheng called into a congressional hearing again yesterday, detailing reported abuse of his relatives and friends in the wake of his escape.

When lauded for his courage and tireless advocacy for victims of forced abortion and involuntary sterilization, Chen simply remarked, through translation: “I am not a hero. I’m just doing what my conscience asks me to do. I cannot be silent when facing these evils against women and children.”

Chen described to the committee how, shortly after his escape from house arrest last month, local government officials allegedly stormed a family member’s house, beating relatives and arresting Chen’s brother. When Chen’s nephew attempted to defend himself and his family, officials arrested him on what Chen calls “trumped up” charges of “homicide with intent.”

Reggie Littlejohn, president of Women’s Rights Without Frontiers, testified on the status of He Peirong, the woman who drove the rescue car for Chen. He, also known as “Pearl,” endured a week of confinement and interrogation in a hotel room by Chinese officials because of her involvement in Chen’s escape. Likewise, Jiang Tianyong, a human rights lawyer in China, was beaten to the point of possibly losing hearing in one ear after attempting to see Chen at the Beijing hospital, according to Littlejohn.

The actions reportedly taken against Chen’s supporters and family are just an extension of the coercive tactics used to enforce the country’s one-child policy. As panelists at yesterday’s hearing detailed, forced abortions, coerced sterilizations, and fines or physical abuse for neighbors and family members of women with unauthorized pregnancies remain a daily reality in China.

Mei Shunping, a victim of five forced abortions, described her time as a factory worker in China, where routine checkups for women were used to guard against unlawful pregnancy: “When discovered, pregnant women would be dragged to undergo forced abortions—there was no other choice. We had no dignity as potential child-bearers.”

Chai Ling, founder of All Girls Allowed, detailed just a few horrific stories of child abandonment, bride trafficking and prostitution, and forced abortions that have occurred because of the one-child policy. Just this past October, explained Ling, a woman reportedly died after a late-term, forced abortion procedure when she was discovered to be pregnant with an unauthorized child. Similar atrocities have been documented in U.S. congressional reports as well.

“I wish I could tell you that these stories were rare, but they are not,” remarked Ling. “They are mere glimpses into the dark environment that the One-Child Policy creates for women. This is the darkness into which Chen Guangcheng tried to shine a light.”

That light of respect for human dignity and individual liberty should be supported by the U.S. and other international leaders who claim to defend human rights. As Heritage’s director of domestic policy Jennifer Marshall writes in commentary this week:

U.S. policymakers have long expressed concern over China’s security and economic challenges to global stability. They ought to be equally concerned about the chilling long-term consequences of gross abuse of human dignity and the destruction of civil society. It’s time for China to end the barbarism of its One-Child Policy.

Denouncing the unjust treatment of Chen Guangcheng, his family, and fellow activists is important. But so too is condemning the coercive population control policies that strip women and men of fundamental rights and prohibit China from becoming a truly free and flourishing society.

Following through on President Obama’s announcement last month in Cartagena that the U.S.–Colombia Trade Promotion Agreement will take effect on...