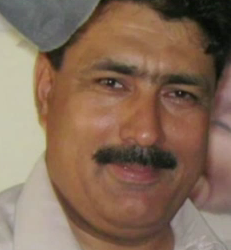 Pakistan has convicted Shakil Afridi — the doctor who helped the CIA locate Osma Bin Laden – treason. The conviction carries a 33 year prison sentence of hard labor. Dr. Afridi (shown left) was immediately sent to the Central Prison in Peshawar, despite being able to appeal the verdict.

The sentence by a supposed ally of the United States in the “War on Terror” outraged members of Congress.President Obama, however,  has declined to put any teeth into his condemnation of the prosecution of Afridi.

Writing in FrontPageMag.com, Alan Dowd notes, “If Washington had a sense of honor, it would demand Afridi’s release by a date certain and allow Islamabad to contemplate the consequences of not complying—a cutoff in aid, an expulsion of Pakistan’s diplomatic corps, a public unveiling and shaming of Pakistan’s duplicitous military-intelligence apparatus, another U.S. raid into the country. But such a demand is not forthcoming from this administration. Afridi is only the latest example of the president’s “oh well” doctrine when it comes to allies.”  Dowd provides many example of the administration’s abandonment of long-time allies of the United States.

Other member of Congress expressed outrage that the U.S. — at a time of tense relations with Pakistan over the NAVY DEAL operation that killed Bin Laden on Pakistani soil – might have outed Afridi by revealing his identity. Commenting on FoxNews.com, Rep. Peter King (R-NY), chairman of the House Homeland Security Committee, said “This has been handled very poorly right from the time of the raid.”

Afridi was arrested shortly after the raid. He was accused of setting up a Hepititus B vaccination program as a front to collect DNA sample from residents in the area in an attempt to locate relatives of Bin Laden.  It is not clear whether Afridia knew who was the target of his investigations.

“It is shocking and outrageous that Dr. Shakil Afridi, the Pakistani doctor who assisted the United States in the search for Osama bin Laden, has been sentenced to 33 years in prison for the crime of treason. What Dr. Afridi did is the furthest thing from treason. It was a courageous, heroic, and patriotic act, which helped to locate the most wanted terrorist in the world – a mass murderer who had the blood of many innocent Pakistanis on his hands.

“Dr. Afridi’s actions were completely consistent with the multiple, legally-binding resolutions passed over many years by the United Nations Security Council, which required member-states to assist in bringing Osama bin Laden and his Al-Qaeda network to justice. Dr. Afridi set an example that we wish others in Pakistan had followed long ago. He should be praised and rewarded for his actions, not punished and slandered.

“We call upon the Pakistani government to pardon and release Dr. Afridi immediately. At a time when the United States and Pakistan need more than ever to work constructively together, Dr. Afridi’s continuing imprisonment and treatment as a criminal will only do further harm to U.S.-Pakistani relations, including diminishing Congress’s willingness to provide financial assistance to Pakistan.”

Afridi was convicted in a tribal court under British-era regulation for Frontier crimes. Had he been charged under the national criminal code, his penalty would have been death.

The Educational Alliance’s 14th Street Y revoked its decision to host an event organized by Young, Jewish and Proud (YJP),...