The Educational Alliance’s 14th Street Y revoked its decision to host an event organized by Young, Jewish and Proud (YJP), the youth affiliate of Jewish Voice for Peace (JVP), an organization that supports targeted divestments against the State of Israel. 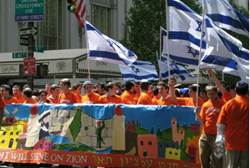 The cancellation, which came within 48 hours’ of the event, seemed to have been triggered by speculations that the originally low-key gathering, was going to generate media attention, The Jewish Week reported.

Event organizer Liza Behrendt said that the event, which was scheduled to take place May 27, was intended to be an opportunity for participants to “develop their own opinions” about the Boycotts, Divestments and Sanctions (BDS) movement.

Behrendt said the goal of YJP is to provide “a place in the Jewish community for people to critically engage with Palestinian movements.” She added that the 14th Street Y was chosen because “we wanted to be in a place accessible to the New York Jewish community, where people would feel comfortable coming.”

She said she had received a last-minute call from Steven Hazan Arnoff, Director of the Y, saying the center’s board had decided to cancel the event, citing security concerns.

Behrendt noted that while Arnoff had expressed concern regarding overcrowding, only about 30 people had signed up for the event and the room’s capacity is 75.

“We cancelled this space rental for safety and security reasons,” wrote Linda Adams, the Alliance’s director of marketing. “At the time of the booking, Go and Learn told us that this would be a training for up to 35 people, but then they issued a press release last Friday (May 25) and we started getting calls from the media about it. We were concerned about large crowds that the press coverage would attract.”

The incident comes amid heightened controversy within the Jewish community over the participation of BDS groups, claiming to be “pro-Israel,”  in the annual Israel Day Parade this Sunday.

The New Israel Fund (NIF) and other groups, which have a long history of what many deem to be overtly anti-Israel activity, have received permission from the UJA-Federation and Jewish Community Relations Council (JCRC) to participate in, what has become, the largest demonstration of support for the State of Israel.

These groups who align themselves with the ‘Palestinian’ cause, attempt to ostracize the Jewish communities in Judea and Samaria, and contribute to Israel’s delegitimization worldwide, have sparked outrage in the Jewish community for attempting to an event, which is intended to be a celebration of the State, not an attempt to attempt to bolster the cries of our enemies.

Petition Obama to Create a Do Not Kill U.S Citizens List

The New York Times reports that President Obama has created an official “kill list” that he uses to personally order...