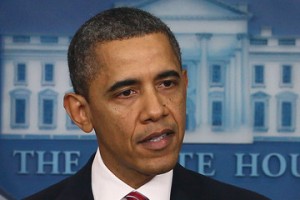 President Obama’s latest speech laid out some policy retreads for tackling the tepid recovery, while he lectured Europe to get its act together. He is right about the sorry state of the U.S. economy, which has proven highly resistant, if not downright impervious, to his past stimulus efforts. And he is right about the threat that Europe’s meltdown presents, which is all the more reason Obama’s past failures at stimulus are so unfortunate and so dangerous.

It’s notable as well that his speech followed a downgrade warning from the rating agency Fitch and the annual release by the Congressional Budget Office (CBO) of the Long-Term Budget Outlook. Fitch told Washington that it must put forward a plan to tackle the massive debt problem, while the CBO called the numbers: U.S. debt will reach nearly 200 percent of GDP in just 25 years. According to the CBO, these debt levels will reduce real GDP by 13.5 percent over the same time.

The President should be proposing a plan to tackle this looming debt crisis. This would eliminate a huge dark cloud hanging over—and holding back—our economy. He could remove another by calling for Congress to disarm Taxmegeddon this summer. Instead of real, effective ideas, his policy slate is just another distracting summer rerun.

Obama’s proposal? The same failed ideas of the past—surprise, surprise, more stimulus spending. Sure, he has relabeled the plan with the sparkling new name “investment,” but a flop is still a flop, no matter what you call it. This plan was rightly rejected by Congress the last time it came up, since it includes a permanent tax hike to pay for temporary spending, which would do nothing for the economy.

Knowing his ideas would get zero traction, the President trotted it out again, and in so doing, tried to shift the blame for the miserable recovery to Congress. Devoid of new ideas, Obama dusted off his old jobs plan, proposed last September, which was itself a rerun of his originally failed stimulus. The President called for spending to bail out states so they do not have to lay off teachers, police, and firefighters. (How this actually would create jobs is unclear.) He also called for spending to boost construction on roads and bridges and other such projects. (No matter that this did nothing to create new jobs in the last massive round of stimulus spending.) He also called for helping homeowners refinance their mortgages. (This is not a responsibility of the federal government, nor will it create any jobs.) As Heritage’s J.D. Foster said last September, “In his jobs speech…the President is calling for more new spending on proven policies that are proven failures.”

The President couched all this spending as “investment.” He is talking about all-new spending, and he would pay for it by hiking taxes on businesses and investors.

The President called for raising taxes on investors, businesses, and entrepreneurs in his speech. These are the job creators he so desperately needs to help revive the economy. Raising their taxes will reduce the already limited incentives they have to invest and add new workers right now.

The President also called for a targeted tax cut for small business owners who create jobs. Just how a small business would prove that it created new jobs is a minor matter, but it illustrates the difficulty Washington has when it tries to micro-manage the economy.

The President does get close to a real solution with the last proposal—freeing up businesses, investors, and families from burdensome levels of taxation. But a major issue hindering economic growth and job creation today is uncertainty. Taxmageddon—the expiration of all 2001 and 2003 tax policy, the Alternative Minimum Tax patch, and the payroll tax cut, plus Obamacare’s most insidious new taxes—is looming on January 1. On that date, everyone who pays taxes in America will see their taxes increase. Rather than call for eliminating this real and tangible stranglehold over job creators today, Obama didn’t even mention it. Yet it is the most important thing Congress should do this summer to unshackle the economy and job growth.

The other crucial thing Washington should do is address America’s fiscal path. The President did touch on this, calling for a “glidepath to fiscal responsibility.” Yet again, cute expression; no substance. He offered no solutions, not touching even one idea from his own Bowles–Simpson deficit commission.

So, the silly season of summer politics is in full swing. Obama has just released another summer rerun—more of the same failed policies of the past and none of the real solutions the nation needs.

Top 5 Things the Administration Forgot to Tell Women About Obamacare

Yesterday, the Obama Administration hosted a health care town hall that was intended to focus on Obamacare’s impact on women’s...