Here is an extraordinary observation: 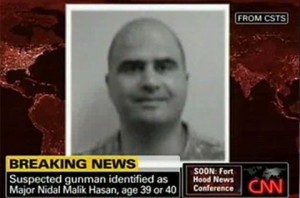 When Obama spoke about the shooting in Aurora, he used the word “terrorize,” a word he never used when Nidal Hasan killed 13 of our serviceman in a jihad attack at Fort Hood. That was “workplace violence.”

Obama knows what he is doing. He wants to drive home the point that “terror” is not Islamic. The Colorado shooting is terror, but Fort Hood is not.

Obama said this about the movie theater murders in Colorado:

“We may never understand what leads anybody to terrorize their fellow human beings like this. Such violence, such evil is senseless. It’s beyond reason. But while we will never know fully what causes somebody to take the life of another, we do know what makes life worth living.”

He used the same phrase in his address in his exploitative event in Aurora: “Even as we come to learn how this happened and who’s responsible, we may never understand what leads anyone to terrorize their fellow human beings. Such evil is senseless – beyond reason. But while we will never know fully what causes someone to take the life of another, we do know what makes that life worth living.” (minute 2:41)

This is his talking point on the Batman madman.

Yet when it came to the Fort Hood jihad massacre back in 2009, Obama showed no similar curiosity about what “causes someone” — jihadist Nidal Hasan — “to take the life of another.” And he did not use the word “terrorize.”

On top of that, Obama did not go to Fort Hood after US soldiers were mowed down in the largest terrorist attack on a military installation on American soil in US history. He cracked jokes, gave a shoutout and then made perfunctory remarks at a Native American confab.

Contrast that with Obama’s immediate departure for Aurora and his attempt to elevate the actions of a sick, pathological mind to a level of some key poltical issue (a la Trayvon Martin, “the son” he never had). The only political lesson we can and should learn from Aurora is that we should get the insane help before they start shooting people for fun. And that “gun-free” zones are dangerous. Disarming the generalpopulation makes them sitting ducks for psychopaths and jihadists.

Bin Laden’s former bodyguard: “Expect great strikes against the US”

Why do they need attacks right now the former bodyguard said? Al Qaeda is getting everything they want right now, without attacks....