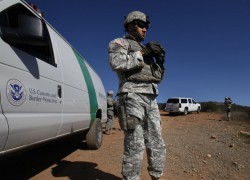 The Texas Department of Agriculture has launched an online video campaign aimed to “shame” the federal government into enhancing U.S. border security. As part of the campaign, called “Texas Traffic—True Stories of Drug and Human Smuggling,” each week over the next four months the Department of Agriculture will release a video chronicling firsthand accounts by Texas farmers, ranchers, and law enforcement of drug smuggling, human trafficking, and other violence along the border.

While reports of the true severity of spill-over violence along the border are heavily disputed, one thing is certain: The U.S. cannot simply sit back and ignore the continued bloodshed and fighting just south of our border in Mexico. Since 2006, Mexico, led by outgoing President Felipe Calderon, has been fighting a war on the nation’s transnational criminal organizations (TCOs). The military offensive and ensuing violence has thus far taken roughly 55,000 lives, including the high-profile cases of Americans David Hartley and Robert Krentz.

In response to this continued violence, the Texas Department of Agriculture calls for “the federal government to enforce our laws and secure our nation’s borders.” Simply enhancing security on the U.S. side of the border, however, is not nearly enough.

Stemming the tide of violence requires a multifaceted approach. Through the Merída Initiative—a three-year, $1.5 billion anti-drug assistance package for Mexico and Central America—the U.S. has offered valuable support to Mexican efforts; however, more must be done.

Combating the transnational criminal threat requires an integrated drug strategy for the Western Hemisphere—one that recognizes that the regions drug problems reach beyond Mexico and into the Andes, Caribbean, and Central America. In both Mexico and Central America, the U.S. can help our friends and allies bolster law enforcement and strengthen judicial reform in order to help halt impunity and corruption, and also work to strengthen military-to-military ties. At the same time, ending the cycle of criminality and violence will also require efforts to strengthen education and legitimate economic opportunities.

Certainly, none of this will happen overnight. Mexico, and the rest of the region for that matter, remains engaged in a generational struggle against the narcotics trade and the threat of TCOs. Mexico and the U.S. must be sure to realize that there is no silver bullet to ending the war on drugs. Enhancing U.S. border security is not nearly enough. Countering the continued threat of violence requires that the U.S. and its partners take a truly multifaceted approach.

Did a US Message to Iran Leave Israel Hanging?