A Palestinian Authority Arab girl who was seen in a widely disseminated video challenging IDF soldiers, in an obvious PA attempt at anti-Israel propaganda, does not regret her actions. 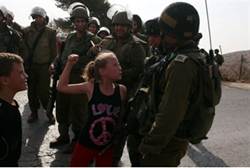 The girl, Ahed Tamimi, who returned from Turkey where she was honored for her actions and even had breakfast with Prime Minister Recep Tayyip Erdogan, told Channel 10 News, “I’m proud of what I did because this is my land and I am not afraid of anyone, and anyone who attacks me, hurts my family and takes my land I will stand before him and prevent him from doing anything.”

“After I came back [from Turkey] everyone wanted to see the award I got there,” she said. “I’ll put it on the table so that anyone who comes will know that the Palestinians are brave and they will continue to stand firm.”

Tamimi told Channel 10 that “I hate the Zionists, not the Israelis. They took my land and everything that I love.”

The video featuring Tamimi, which was uploaded to YouTube last month, shows her “getting in the faces” of the soldiers near Nabi Saleh and spending a considerable amount of time cursing them, shouting herself hoarse and hitting them on occasion as well. At the same time, adults all around her taped the occurrences, waiting for a soldier to lose his nerve.

The staging of scenes for Israel-baiting is such a common Arab tactic in the Palestinian Authority that the industry has come to be known as “Pallywood.”

The most famous and successful Pallywood film ever made was that in which an Arab boy, Muhammad a-Durah, was placed in proximity to a Gaza firefight in 2000, and made to look as if he had been shot dead by IDF soldiers. Belated investigations showed that shots fired at a-Durah came from Arabs.

Tamimi’s mother told Channel 10 that she is “proud of what my daughter did that day because in the end if we die as martyrs, people will continue our way.” At the same time the mother indicated that she believes there will ultimately be peace with Israel.

Tamimi was seen in the video challenging soldiers over her brother’s arrest, but reports in Israel last week indicated there had been no evidence whatsoever that her brother was indeed in an Israeli jail.

Other members of Tamimi’s family, including her father, are indeed serving time in an Israeli prison, reported Channel 10.

U.S. President Barack Obama is set to nominate former Nebraska senator Chuck Hagel as Secretary of Defense, according to various...