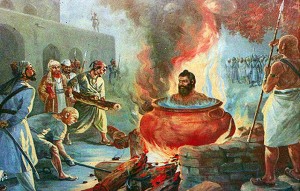 Pakistan formally designates its Infidel population as dhimmis. What this means is Pakistan is openly legalizing discrimination against its minorities as mandated by Islamic law.

Islamic law mandates second-class dhimmi (“protected,” and “zimmi”) status for non-Muslims in the Islamic state. Islamic apologists in the U.S. routinely claim that the second-class status for dhimmis is a historical relic, never to be revived again. They are, of course, lying.

“For the first time Pakistan gives representation to a Sikh in Sindh’s Zimmi welfare,” by Yudhvir Rana for TNN, May 25 (thanks to Anang):

Muslims believe that Islam must be supreme among religions. Members of all religions other than Islam are classified as ‘Kuffars’ – infidels who must be humiliated and in some cases exterminated. Jews and Christians who accept the supremacy of Islam are dhimmis who are allowed to live in subjugation, although the Koran requires that all Jews must be exterminated eventually.

Sikhs (together with Hindus, Buddhists and Pagans) are classified as Harbis – people who are at war with Islam. (The Harbis don’t need to do anything to annoy Muslims. The Harbis’ mere existence is itself an act of war. A Harbi has no rights, not even the right to live.)

Consequently, Muslims have persecuted Sikhs from the origins of the religion in 16th century India, and continue to attack them to the present day:

AMRITSAR: For the first time a Sikh has been included in the Sindh Zimmi welfare committee, Pakistan to ensure development of Gurdwara’s, the welfare of the Sikh community in Sindh along with equal distribution of funds provided by the ministry of minorities.

Chairman, Pakistan Sikh council, Ramesh Singh told TOI over phone from Karachi on Saturday, that he had been included to represent Sikhs in Sindh in the welfare committee constituted by ministry of minorities. He said that the word ‘Zimmi’ had been used instead of minorities as it refers to non-Muslims of an Islamic state.

Sindh has a population of around 5500 Sikh; majority of them being financially week face various problems. “We face difficulties in getting government grants, job quota’s, and financial assistance during medical treatment or marriages,” he said. He said the committee would ensure optimal utilization of government grant in aid to the deserving recipients, and would also recommend proposals regarding the maintenance and construction of religious places besides appropriate distribution of resources.

Not only a Sikh, but the Sindh Zimmi welfare committee has also included a Parsi for the first time; informed Ramesh Singh. “It is for the first time that Sikhs and Parsis have been included and attention is being paid towards our developmental projects.”

“Our main task is to supervise the allocation of funds to different communities and ensure that they are judiciously utilized,” said he. He said the resources would be allotted as 40 per cent each to Hindus and Christians, 10 per cent to the Sikh and 5 per cent each to the Parsi and Buddhist communities.